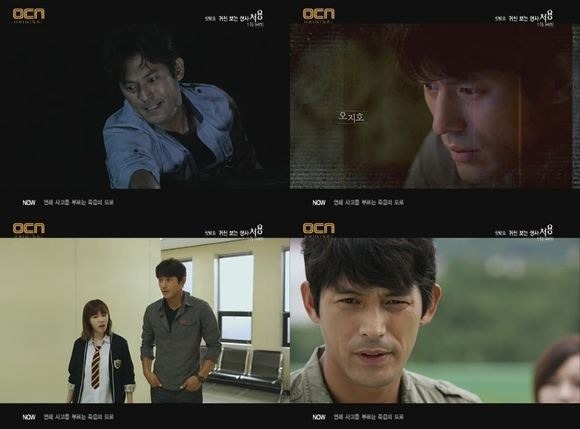 I know I should not compare this drama too much to "Who Are You - 2013". "Cheo Yong: The Paranormal Detective" is entitled to do its own thing, and while both dramas feature police officers with the ability to see ghosts, there are clear fundamental differences that make these dramas fundamentally different. But right now, I'm sorry, I just can't help it. "Cheo Yong: The Paranormal Detective" is like "Who Are You - 2013" except without the fun.

The immediate culprit for this is Cheo Yong himself. I can't tell whether it's Oh Ji-ho's performance or some other quality of the production- but either way I just really don't like the guy. He's gruff, mean, and doesn't get along with others. But there's no self-awareness about any of this. So Cheo Yong just comes off as kind of a jerk who has the ability to see ghosts. Which for the most part he won't acknowledge. It's part and parcel for his personality, but leads into another problem. The ghosts themselves are mostly just annoying.

I'm not sure whether they're objectively obnoxious or whether I just think they're obnoxious because that's how Cheo Yong is treating them. Either way the result is that there are annoying people on screen that I really don't want to have to look at. Na-yeong (played by Jun Hyo-seong) is just a terribly irritating pest. She sounds more like an unwelcome narrator than an actual character involved in the action, and I really don't need to be constantly reminded of the existence of ghosts. I know Cheo Yong can see ghosts. It's right there in the title.

Detective Seon-woo (played by Oh Ji-eun) is the bright part of this ensemble. Oh Ji-eun manages to effectively give off the sense of someone who is passably competent at her job and is also invested in the storyline. She also does a fairly effective impersonation in the latter part of this episode. However, being able to accurately imitate a character I already do not want to see isn't exactly a major improvement in terms of quality standards.

The impression I'm getting right now is that Na-yeong is supposed to be comic relief while everyone else is a serious cop. I really hope I'm wrong about this, because Na-yeong is not funny. She's annoying. This drama is in dire need of better stuff for its characters to do- the detecting part of the storyline is not doing much of a job arousing my interest so far. If a drama called "Cheo Yong: The Paranormal Detective" fails to evoke serious interest either in ghosts, detecting, or Cheo Yong...yeah, we got a problem.