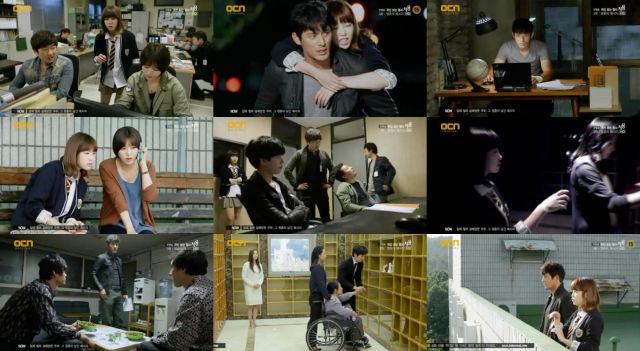 I don't find the idea of a woman who loses control of her body and blacks out for several hours at a time without any memory of what happened to be a particularly amusing one. "Cheo Yong: The Paranormal Detective" is trying to push this as a form of comedic relief, but it's honestly just kind of creepy. Not in a good ghost story creepy way either, given what little is done to actually address how Seon-woo feels about it.

The general anonymity of the drama's whole premise is problematic really. Na-yeong is, for all intents and purposes, a member of the investigative team, even if Cheo Yong is the only one who knows she exists. This leads to a kind of a weird situation where at any given moment most of the police don't actually know what's going on because Cheo Yong and Na-yeong are keeping investigative information a secret. Granted, there's a good reason for this- but for the most part the drama doesn't address this rather strange issue.

So, considering these problems, how does "Cheo Yong: The Paranormal Detective" shape us as far as a mystery? It's passable, I suppose. Although the direction it ends up taking is rather dark- and not in a good way. After comic relief involving body snatching and Cheo Yong's unfortunate tendency to yell at annoying ghosts, it's a bit difficult to really stomach a murder storyline that involves domestic violence and suicide attempts.

The main thing keeping me engaged at this point is the titular detective's tendency toward extreme violence, and this goes down really poorly with a storyline that's a stark reminder that, oh, right, in the real world violence is actually pretty terrible. I'm really not sure what emotions the drama is supposed to be invoking at this point. The narrative is all over the board in this regard and some consistency is really important here.

Now, I'm not insisting that the drama have to pick one tone and stick to it. "Who Are You - 2013" did a pretty good job balancing out the tone by having the shift happen in between episodes. One episode there would be silly detective stuff, and then the next romance, and then the one after that serious plot danger. "Cheo Yong: The Paranormal Detective" is trying to do too much at once. Perhaps we're still in the character building stage- if so I hope the drama finishes it soon. These characters are much more interesting when they actually do stuff rather than narrating.