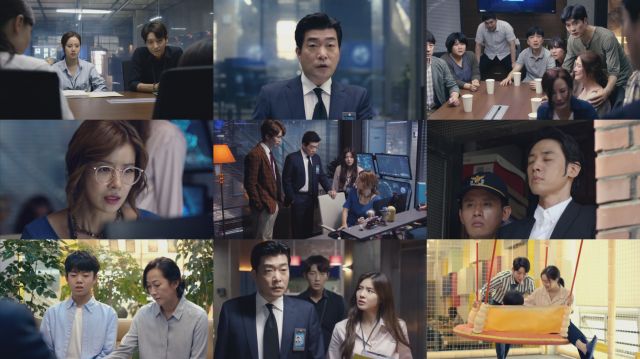 As expected, with the red herring revealed it's up to the criminal profiling team to locate the true culprit, who has finally and truly gone off the deep end and is now involving herself in car chases. I remember how a few stories ago I thought there would be a gratuitous car chase and was mildly surprised that didn't happen. And I guess technically this wasn't really a car chase anyway, I just can't get past the ludicrous visual of screaming children handcuffed to their seats in daily traffic and no one noticing.

The resolution of the case is a bit more interesting, in that we get some discussion of psychological recovery. That's a necessity more in this case than the previous ones, on account of the fact that an unusually large number of victims are still alive. All the same, I can't help but wonder why this prospect is so frequently discussed so little. Gi-hyeong's wife died because of his work, and so far as we can tell Gi-hyeong didn't even bother to take a vacation.

These criticisms are, I admit, a tad unfair as this kind of shallow exposition is to be expected from the crime procedural format. But now that "Criminal Minds" has moved into a more consistent pattern it's easier to nitpick than it is to attack the drama in broad strokes. Like, what am I even supposed to do about the sequences with the master serial killer? They exist mostly so that when the team finally gets a decisive clue in that case we'll appreciate that this guy is much worse than any of the other perpetrators.

I mean, granted, he does at least have the sense to avoid leaving obvious clues everywhere he goes. That's the main part of the format I can unambiguously praise. Yes, the criminals are frequently ludicrously broadly played nuts, but the central draw to "Criminal Minds" is that the characters make the effort to acually explain where this behavior comes from instead of simply assuming that rabid lunatics are a normal part of daily existence.

The clues, too, are logically constructed and it's pretty easy to follow the overall train of thought. The distinction between a normal criminal and one with a fancy profile is clearly dilineated, so I don't get the sense lately that "Criminal Minds" is trying to make broad statements about the human condition. While I appreciate that the production team aims lows and succeeds low, that's still not an especially inspiring statement.