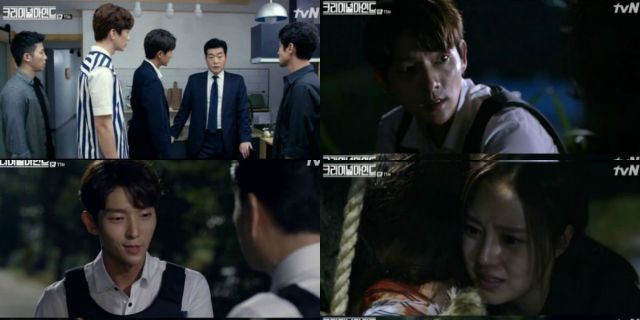 In one of the more interesting flourishes I've seen from "Criminal Minds" to date, the recap brings up previous cases which had psychological profile elements that are relevant to the main case here. I suppose that's one way to to create implied continuity. Even if "Criminal Minds" is not always the best at objective logic, if the internal logic is sound than we can at least get a good grasp on what's going on and correctly make assumptions about certain evidentiary implications and possible character reactions, while still knowing that there are lots of other unknowns out there.

I mean all right, the case is more complicated than that. And admittedly, that was another good idea thrown in here, was to make the villain sympathetic by portraying him as suffering from a mental illness. On a literal level, of course, all of the villains in "Criminal Minds" are crazy. It's an important part of the concept. Min-soo (played by Jung Tae-woo) stands out because he is trying, in a very bizarre and twisted way, to solve problems. That violent murder isn't actually a solution to any problem is an important part of his character conflict and illness.

All of this taken together makes for a reasonably compelling case- within the confines of the formula, as is to be expected. Mind, there are still plenty of flaws I doubt will ever be fixed entirely. Increasingly, I'm getting the impression that the only reason Na-hwang's character exists at all is so she can have horrified reaction shots at whatever awful thing the villain is doing this time. But hey, if Min-yeong got her moment, maybe one day Na-hwang will too.