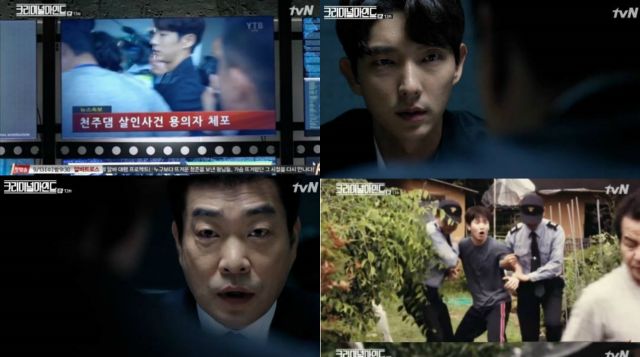 So the whole hanging plays out, just as disjointedly brutal looking as the last one. That part wasn't so surprising. More amusing was how it only occurred to Gi-hyeong at the last minute that maybe the adoptive parents of the child of serial killers would maybe not want to break that news to him on the night his biological mother is being murdered by the state. Anyway, once that's over with it's on to the next case where apparently Hyeon-joon is a suspect.

Now, this is actually an even better clue of how "Criminal Minds" is based off of an American drama than all that goofy death penalty stuff. It features police officers arresting other police officers. This does not, of course, happen in the real world. In the actual United States cops can murder teenagers in cold blood and the reaction of other cops will be to march to the streets to demand the guy being given a paid vacation.

But in the propagandistic world of American cop shows, all cops are good guys to a fault. Like, the closest they get to serious flaws are that they might punch a suspect for being too evil, or accept bribes because they aren't paid enough by the city. The really bad cops are of course instantly spotted and easily dealt with, since it's not like some criminals intentionally become cops so they can abuse the power of the badge and the brotherhood to run their own mafia empires.

What does that have to do with this episode of "Criminal Minds"? Not a whole lot, granted. It's just what I felt like writing about because the story here is so boring that analyzing the propagandistic underpinnings is a lot more interesting than discussing the big fat nothing that is the dramatic tension. We know that Hyeon-joon didn't do it. There's barely enough evidence to bring him in for questioning, let alone a full-on arrest.

That kind of stuff is why I tend not to like American dramas in general. Yes, I know, fiction does not necessarily have to be realistic, but it's a little offensive to see a murder investigation presented without even attempting plausibility, because adhering to the set formula and hitting the chosen tropes of the week takes precedence. In all fairness, I doubt very much that this Korean version was any worse than the American original (episode two, season twelve for the reference's sake), technically or otherwise, so take from that what you will.