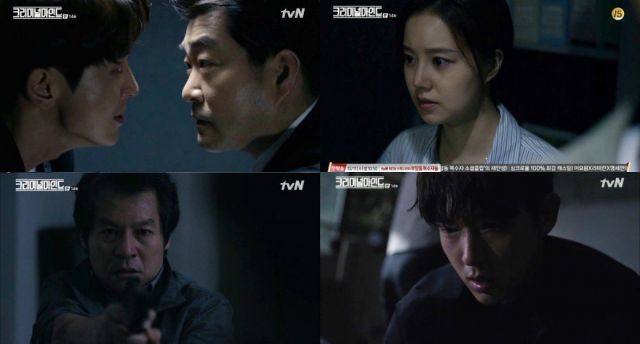 It's gratifying, if horribly annoying, that the extended conclusion to the Hyeon-joon under suspicion plot ends with that all too American aggressively pro-police ending, justifying my digression last review. There was a conspiracy against Hyeon-joon, and police were involved. Yet somehow, the motives all shake out in such a way that no police officers were actually at fault. They were either tricked, or bullied into the situation by unforeseen unfair circumstances. Also one of them punches the suspect for just being too evil.

Not just evil, but stupid too. Which isn't to say that monstrous criminals have to be smart. All too many of them are idiots. They get away with serial offenses usually because some such powerful organization might be embarrassed should details of their crimes become public. Any large organization is subject to this- whether they be charities, corporations or again, the police. Who in real life really hate investigating other police, but in fiction it's their favorite pastime.

Dramatically, at least, the beats here are more interesting than last time. The scene where Gi-hyeong confronts Hyeon-joon with profiler logic was actually pretty cool, and something that only could have possibly been justified by having Hyeon-joon put under arrest somehow. The big action scene is also, by "Criminal Minds" standards anyway, pretty well justified, and limited as is appropriate for the scale of the situation.

Then it's on to the next case, which showcases a completely different set of annoying tropes- just more of the usual criminal voyeurism stuff. The set-up really is comical in the sheer way it's contrived to look like an exploitation film. A bunch of cute young women swimmers, alone in a scary building after hours, grabbed at by a sinister figure from the shadows and thrown into a basement somewhere? Uh-huh. Sure.

I will give credit on one point though. Once the profiling team gets involved, right away they get into logistical questions of how exactly the perpetrator got into the building in the first place, let alone knew how and where to find the young women. There is that bit of a false start where it seems like a lot of time is going to be wasted on the victims' families trying and failing to get the police involved, so it's lucky one of them knows Min-yeong. Which is a bit silly, considering we had already seen police freaking out in previous cases because a person disappeared for, like, an hour.