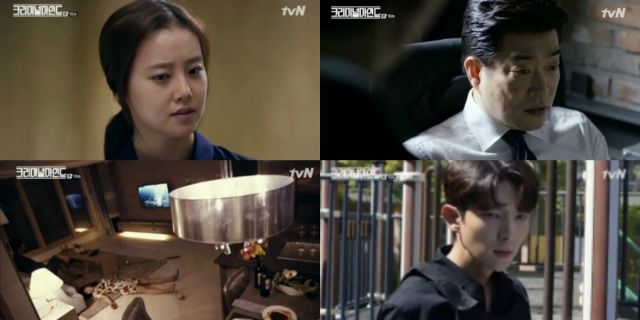 A very good mystery hook is set up almost immediately- though lacking in any apparently obvious clues, we do know that the murderer has wacky fingers. I like this because usually, random witnesses in crime procedurals have disproportionately photo accurate memory. That the big clue is an explicitly weird and not obviously noticeable tic is actually a pretty good clue, and not something a mentally ill murder suspect would necessarily even notice he was doing.

That's one of the better possible angles to go after in a serial killer story- focus on the weirdness, rather than the grotesque factor of how the serial killer murders his victims. This episode is thankfully absent of any such gory imagery save for the pictures of what the victim looks like after the serial killer is done with them. This also has the advantage of putting us on the same page as the investigators. We have the same information that they do.

The philosophical point being made is a tad murky, although full exposition of it is so late I don't hold it as too much of a problem. As usual, though, the ideas about the nature of justice and the inefficiency of the criminal justice system to sufficiently punish criminals are pretty weird. And of course, quintessentially American. It amazes me that the country with the highest gross prison population on the planet still blares out propaganda about how we don't have enough people in jail.

This also led to that weird feeling when I correctly guessed the serial killer's motive way earlier than I should have, solely because one of the victims ended up being a Catholic priest. There is something Catholic priests are famous for yes, but the ones in South Korea have never engaged in that kind of activity. As far as we know anyway. This does accidentally make the mystery more clever, but only for people not familiar with the stereotype.

Anyway, the primer we get for the next case is also fairly promising. I liked how we got to see the entire full context of the crime, yet almost immediately discover that this context was quite misleading, and even the room itself wasn't what it looked like. No, it's not another movie set. If there's one thing I have to hand to the production team of "Criminal Minds", they picked a pretty diverse set of episodes to adapt. There's surprisingly little overlap to the plots considering they all have to adhere to the same basic formula.