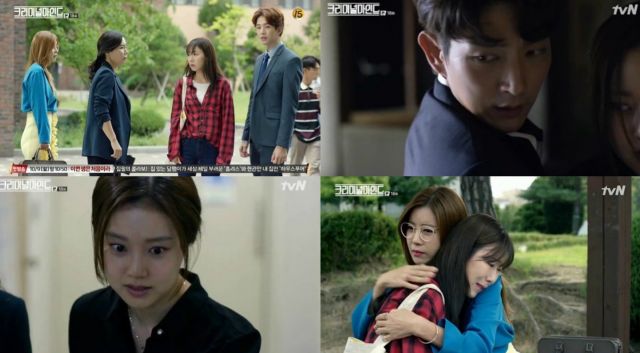 Well, this was a fairly distressing storyline, albeit mostly for the intended reason of the profiled crime of serial rape being so monstrous that doing research on it makes me feel a little physically ill. "Criminal Minds" even achieves this effect without having to resort to overly gory imagery. The cold open in the couple's house cuts off before getting too graphic, and the most painful scene in the episode is when we find out how and why one of the victims committed suicide.

There are still some logical problems. At this point teleporting serial killers is such a widespread trend I should just assume this is something all serial killers know how to do. The ability of a single, technologically literate person to be able to monitor so many actions and make so many correct assumptions is just a tad implausible. The serial killer's abilities aren't much more functionally different than Na-hwang's, after all, and we see her limits all the time.

But I didn't notice these issues quite so much as last episode because the serial killer isn't in direct profile. He's just barely mysterious enough that every little clue we get to unraveling the case further makes increasing logical sense. There's also the matter of how once the team figures out where he's coming up with his victims, his potential to do damage drops dramatically. Not that this helps with previous victims but whatever, "Criminal Minds" in all forms is an essentially grotesque premise about the inherently horrible world we live in.

This version does, surprisingly, contain some significant improvements over the American original (season two episode five). The serial killer's motive is actually given a pretty clear explanation via flashback- the moment that started this all off almost makes him look sympathetic, which rather enhances the horror of his later crimes. That's the "Criminal Minds" concept at its best. The explanations don't have to be perfect, just satisfying.

The other obvious improvement is just the removal of some of the more glaring American pro-cop propaganda. The whole bit where the villain is caught then improbably released via lawyer is excised, those scenes replaced with more extensive detective work getting into the emotional and physical details of the crime. Also the rapist is not murdered in cold blood by a police officer who lies after the fact about what happened. I can see why that detail might have been going a bit too far for a South Korean audience.