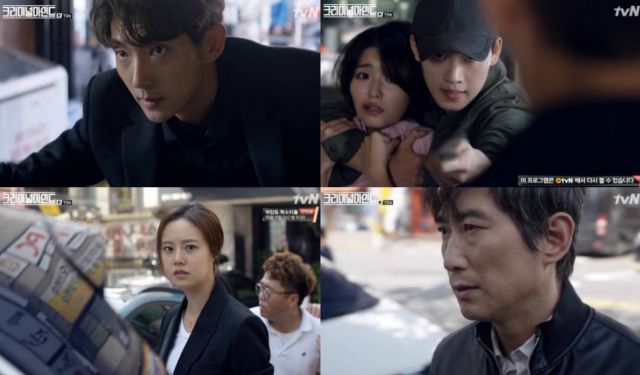 The final showstopper for "Criminal Minds" is an appropriate one- it looks like the drama will be closing out on an adaptation of season four episode fifteen, which centers around a copycat killer. Even the Reaper manages to get worked into all of this in a fairly satisfying way, although yikes, I'm still reminded of how the death of Gi-hyeong's wife happened way too early. Which also sums up my overall feelings. My satisfaction is directly related to how much I enjoyed the original elements.

Fortunately the selected crimes are the ones where the specifics of how the crime was committed were exposited in fairly effective detail. Explanations have always been the most satisfying aspect of "Criminal Minds", and the most frustrating moments were the ones that were not sufficiently explained. Horrifying body count notwithstanding, at minimum we at least get a pretty good impression that the overall team knows what they're doing.

Except Na-hwang. Something's definitely up with her. The second scene where she was in an unexplained rush was very suspicious. Although, maybe Na-hwang just had a sudden urge to go to the bathroom. Also, what was the deal with that first scene, where she's trying to take the perfect selfie? That actually has a more plausible explanation- clumsy product placement intended to show off the editing abilities of that specific brand of smart phone.

Spotlighting silly moments like that aren't exaclt fair, but as a procedural mystery there aren't exactly a whole lot of interesting thematic angles by which to dissect "Criminal Minds". Seon-woo's mental state in the aftermath of her having killed a suspect last episode is briefly explored. This is interesting material, since even if the last killer was a monstrous dude, he was also pathetic, and killing any follow human being for any reason is something that should shake the psyche of a normal human being.

I mean really, that's the entire hook of the premise after all. But alas, tied as it is to the original "Criminal Minds" concept, there's only so far the South Korean version can go in terms of interesting alterations. I can certainly give the production team credit for trying. The whole randomly changing story length from anywhere between half an hour to two hours idea has had its ups and down, but they did pick a pretty good idea to finish the drama with as a two-parter.