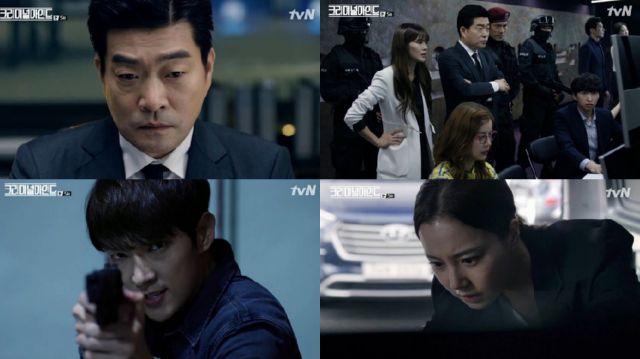 For reasons that are unclear to me, "Criminal Minds" really wants to be an action cop series. We open up with Hyeon-joon assaulting and letting go of a possible perpetrator in a parking garage. Then there's a whole setpiece that goes through a park, a tunnel, and finally an ubran alley without any pedestrian or automotive presence unless the script specifically calls for it. Gi-hyeong really seems itching for a fight most of the time, even if he's not all that good at fighting.

The purview of the criminal profiling team is poorly defined, considering how they do almost no criminal profiling that we see. At one point the military attempts to take over the investigation and to my great surprise, I found myself siding with them. Since most of the main team's efforts devolve to violence sooner or later anyway, wouldn't it make more sense to have the guys whose professional job is actually violence be in charge of the operation?

Especially since Hyeon-joon is the only character we see who actually gets action scenes. Actually, he's the only character of any real importance at all that I can tell. Observe how, even though Seon-woo is the one in position to actually defuse the final conflict, Hyeon-joon is the one who has to relay instructions to her. Min-yeong obsesses over the fate of her niece instead of doing her job.

Gi-hyeong gives orders, occasionally hesitating because of random post-traumatic stress. Na-hwang has the most useful role as the character who narrates what the computer is saying. Han's main contribution is, of all things, expressing interest in a book that appears to say "Female War", which is probably the worst possible book to use for the purpose of hiding a secret lever.

Was any of this in the original "Criminal Minds"? Because I'm reading the synopsis of the matching episode, number twenty-two of season four, and none of this goofy chasing the Übermensch serial killer stuff is in there. Mostly it just looks like the story was about exploring how and why someone would want to cause an anthrax outbreak, and how this related to their mental pathology, finally culminating in a climax where the villain is undone by their true desires. How did screenwriter Hong Seung-hyeon take that, and turn it into something with as stupid a cliché as cutting the right wires to a bomb? I can't make any sense of it.