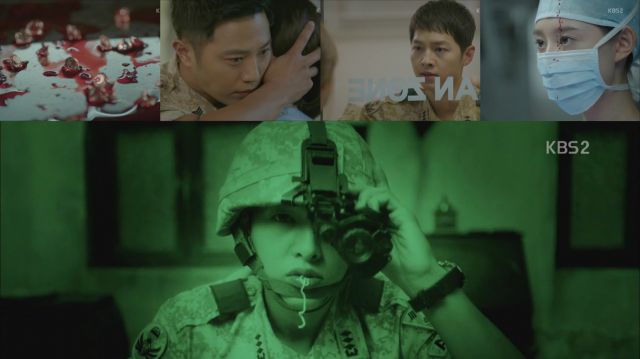 With the romance firmly cemented by episode 9's romantic antics and kisses, episode 10 introduces some major plot points to yank the drama back into action. Not that its ratings need more action - they're consistently on the rise. This episode clocked in at 31.6%, 1.2% higher than last night's episode. "Descendants of the Sun" is battling itself episode to episode for best ratings. Fancy choreography, intricate camerawork and a viral disease are in another tussle; one for the most exciting moment of the episode. It doesn't lose the romantic flavors of last episode, but the hot points are definitely the action.

Argus isn't quite as scary as I'd hoped even though he's an arms dealer and a friend-turned-foe. His men are pugnacious and stupid, but their presence under Argus' clever and Machiavellian guidance means that Si-jin, Mo-yeon, and the others are in danger whenever Argus turns his attentions upon them. He's focusing on them now, although it should've been sooner in the show. The connection between Si-jin and Argus is a bit too coincidental, but it does provide for scintillating tensions between Si-jin and a man who provokes a deep gut reaction in our handsome hero. And Argus isn't our only villain. Oh no. We have to battle what many soldiers and civilians must face in times of strife: disease. It runs rampant and keeps the doctors busy. It also puts them in danger. I wish the disease had been better integrated in the story, perhaps introduced as a possible ramification of working in a third world country, however imaginary it may be. 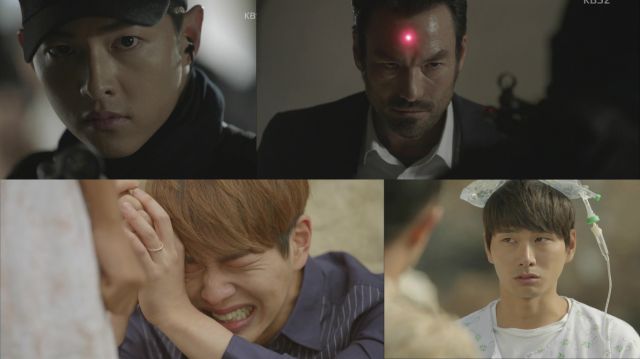 The romantic moments were adorable and the little tiffs between couples grew the bonds between them and between them and the audience just in time to endanger the happiness of the lovers. Smart move, Writer Kim. Smart move. We also have Chi-hoon's continued agony over leaving his patient. The young man will not forgive him and Chi-hoon accepts the verbal lashings willingly. It's heartbreaking to see. One of the strongest moments was when a child quietly comforts Chi-hoon as he sobs despite the fact that neither of them speak the same language. Care for another human being is universal, and mistakes are to be forgiven - hopefully Chi-hoon will learn to forgive himself.

Mo-yeon progresses in her understanding of Si-jin and his job. After a slickly choreographed fight scene between an outnumbered Si-jin and Argus' buffoons, Mo-yeon revels in the fact that she barreled through walls to fetch him in their car before stealing away. The exhilaration prompts some kinship between her and Si-jin as she learns to understand him and his chosen career path, and the rush that comes with the danger and excitement. It's truly about time. 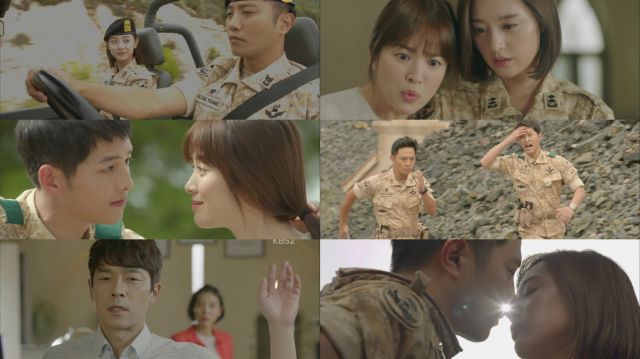 With the next battle against disease, the drama may turn to relationship building, or run parallel plot threads between Argus' weapons trafficking alongside some drug trafficking and disease. In any case, these later episodes are definitely more engaging. Now we only have to find it within ourselves to wait until next week.

HanCinema viewers, what was your favorite moment of this episode? 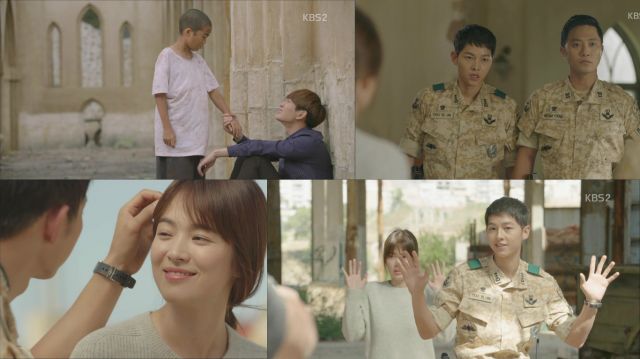 The location Si-jin and Mo-yeon visit to save Fatima is an old abandoned fertiziler factory in Drapetsona. The area is in Athens (Piraeus). There have been plans announced to revitalize the location by turning it into a park with recreational, sports and other facilities.

Name of the week -

Trivia by: Orion from 'Orion's Ramblings'

"[HanCinema's Drama Review] "Descendants of the Sun" Episode 10"
by HanCinema is licensed under a Creative Commons Attribution-Share Alike 3.0 Unported License.