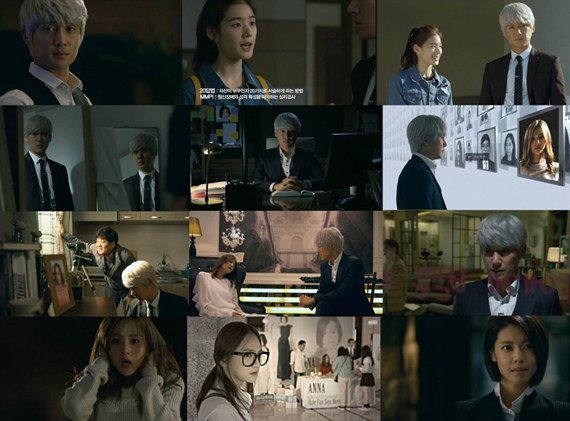 It soon becomes clear why "Doctor Frost" has spent so long in production. They had to work on the soundtrack. Seriously, just listen to that. It's pretty hip stuff. There's mind-bending music for mind-bending investigative games, cool tunes for cool walks, crazy stuff for when the mental patient finally manages to lose their marbles. Director Seong Yong-il is clearly going for a certain level of ambience here, and it's succeeding.

A few factors work to make "Doctor Frost" different from the usual investigative fare on OCN. In the first place it's based on a webtoon- a fairly old one at this point, and one that bears surprisingly little similarity to the drama in terms of narrative structure. It looks like both have the same larger framing device of the mystery of the titular doctor's past, as well as the general backdrop of the college psychiatric department. The actual mysteries, though, represent a radical shift, as the drama features patients who are a danger both to themselves and others. In the comic it was just to themselves.

Only Doctor Frost himself (played mutely and accurately by Song Chang-eui) is the real commonality. Even his sidekick Seong-ah (played by Jung Eun-chae) differs significantly from the source material. She's a much more proactive character, one who actively questions Doctor's Frost's attitude instead of just going along with whatever he does. I don't know whether or not the new Seong-ah is an improvement just yet, but she's definitely interesting to watch. And that's the main thing the drama needs right now anyway- the excitement factor.

To date it's succeeding quite well on this point. All sorts of interesting production design choices work to make the drama engaging. My favorite is probably Frost Vision- where we actually get to see how Doctor Frost's brilliant deductive mind perceives the world around him. Even with all these clues, though, some mysteries remain difficult to place- such that yeah, we do need a bit of an explanation by the end. Luckily it's a convincing one.

"Doctor Frost" is off to a strong start. It's doing what most adaptations should do- recognizing the part of the source material that works and trying to adapt it to the transplanted medium. I don't actually even blame OCN all that much for taking psychiatric mysteries and turning them into something more structurally similar to criminal investigations. All of it works well in service to the character. And more importantly, even to those of you with no familiarity to the source material, this works to make "Doctor Frost" pretty fun television.