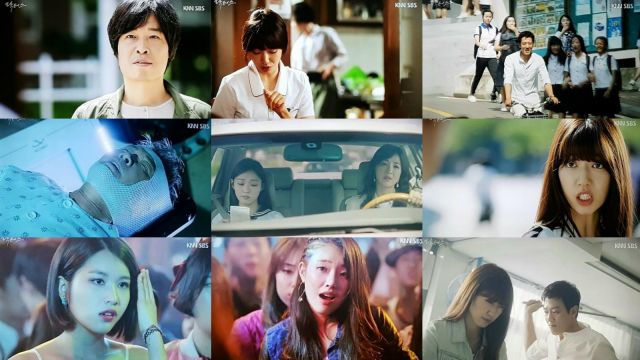 Hye-jeong (played by Park Shin-hye) is a doctor who plays by the rules, which she enforces violently when necessary. Right away "Doctors" makes a point of messing around with expectations. Watching the first scene I could visualize director Oh Choong-hwan and writer Ha Myeong-hee in a room together, coming up with new unusual ways to make Park Shin-hye surprising. Let's make her look old. Also let's make her a juveile delinquent, with action scenes. And most importantly of all, let's make her love interest Ji-hong (played by Kim Rae-won) an antagonistic presence.

The whole "looking old" thing is more significant that it may sound. After "Doctors" quickly drops us into flashback land, the main overriding feeling of the Ji-hong's school is that all the students look old. This is not merely because, as usual, these are actresses in their twenties pretending to be high school students. Rather, they also pretend to be adults by wearing makeup, trying on sexy clothes and getting into fights.

Hye-jeong defies this, not because she necessarily dislikes doing any of those three things, but because she's a standard rebel without a cause. Hye-jeong has exhausted pretty much all of her parental goodwill, yet even after a big tearful cry shows no indication of changing her bad habits. What's especially funny about all of this is that Hye-jeong is indisputably the same doctor we saw in the opening scene who effectively lays down the law with a bunch of grown-up gangsters.

It's unquestionable at this point that Ji-hong is the key to whatever personal transformation will be necessary to allow Hye-jeong to use her powers for medical good rather than adolescent rebellion. To date he hasn't actually been all that successful in this goal, but what I like about Ji-hong is that he's a good teacher. The man does not know when to quit or give up however foolish he may look in the process.

So far "Doctors" is more of a case of great expectations. We're given an endpoint, and the main source of amusement is guessing how we're going to arrive at that endpoint from Hye-jeong's currently unruly teenage years. There hasn't really been any serious discussion of medicine so far- just notation indicating that Ji-hong knows a lot about physiology from books and Ji-hong knows a lot about physiology from punching people. And sooner or later, somehow or other, these two are going to get together and fight...sickness.