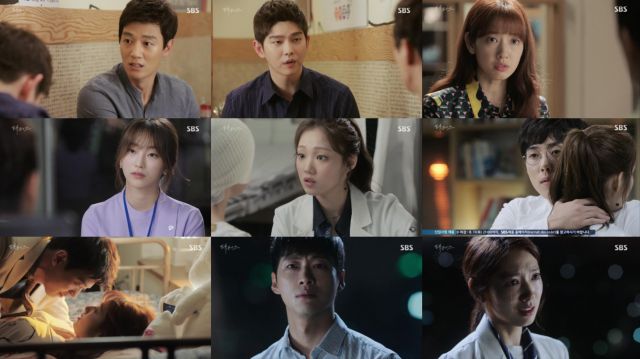 Min-ho (played by Jung Hae-kyun) is Hye-jeong's estranged father. I've never had much cause to discuss Min-ho because it's never been clear to me how important he was to Hye-jeong's story. It kind of seemed like Min-ho was just another obstacle Hye-jeong had to overcome, even though he has sympathetic character traits. Seo-woo, you may recall, has the same problem. Well, both the opening and the closing of this episode directly address the relevance of Min-ho's presence/absence in Hye-jeong's life- to powerful cathartic effect.

Or maybe it just seemed that way because I'm so used to "Doctors" lacking any kind of emotional impact at all. Writer Ha Myeong-hee very much dips into the melodrama toolbox for the plot this time around. Under normal circumstances I might be more critical of the way the story goes but...well, Namgoong Min is just really good being the victim of the melodrama for once. It's hard not to get choked up by the tough decisions he makes, even if they are obviously the wrong ones.

One reason why this is such an effective conflict for Hye-jeong to confront is that she can't solve this problem by being an amazing doctor. It also highlights why the occasional talk about money is in fact important. Hospitals are expensive, which is why if you're happy with your medical care, you should donate to the hospital directly instead of gifting the attending physician with a car.

Yes, I'm still bitter about that and other past plot points. Truthfully, I'm not expecting "Doctors" to improve much once Namgoong Min finally leaves because there's still this annoying goofy propensity throughout the other stories. Soon-hee apparently runs the main hangout for all the doctors in the hospital now, which means they'll show up at the most inappropriate times for the most inappropriate reasons. While these scenes aren't bad they are fairly silly.

But "Doctors" has always been strongest when it's been taking stabs at the metaphorical heart (I still find the literal surgeries to be pretty boring). Baek Sung-hyun has trivially little screen time yet consistently gives a strong performance just by convincingly being Seo-woo's best friend. It means a lot more to be nice to someone who's kind of a jerk than it does to someone who is consistently portrayed as perfect and super-attractive. Although oddly enough, with her parental issues more exposed, I find I'm liking Hye-jeong more as a protagonist now than I have in quite awhile now.