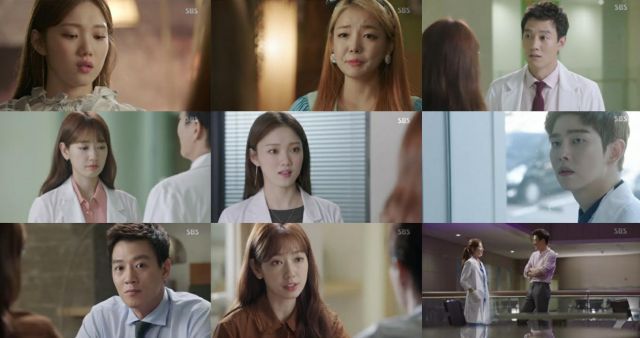 It remains unclear the extent to which Hye-jeong's obsession with revenge is supposed to be seen as sympathetic for not. It doesn't help that Hye-jeong manages to stupidly implicate herself almost immediately in a clear unambiguous threat. Later explained context doesn't really help the situation. Co-workers aren't supposed to use that kind of language with each other no matter how much enmity there may be.

That's all just more of the usual problem with "Doctors", though, is expecting the viewer to base their sympathies around how characters are flagged personality-wise rather than what they actually do. Note that having been cleared of explicitly nefarious activities when it came to Hye-jeong's grandmother's surgery, the writing is forced to pivot to a completely unrelated conspiracy that has pretty much no relevance to the main story whatsoever.

Another calling card shows up in the form of old forgotten plotlines having disproportionate relevance considering how little we've actually seen them explored. Remember the good old days, when Hye-jeong, Seo-woo, and Soon-hee were all delightfully playing and having fun in the garden of youth? Apparently Hye-jeong's general obsession and change with motivation stretches back all the way that far. Bah...I almost would have preferred it for Hye-jeong and Ji-hong to be outed for their illicit relationship, since that was at least clearly explored at the time.

Also note the three week timeskip, as if the production team realized that it's actually really hard to center "Doctors" around Hye-jeong if she doesn't have any particularly good reason to be at the hospital in the first place. This naturally does a lot to kill any sense that Hye-jeong suffered any serious consequences for her actions. Bear in mind that even if Hye-jeong was only targetted as the result of a vendetta, she's the one who chose to take the fall for Kang-soo who was much more indisputably at fault.

So are there any nice things to write about "Doctors" at this point? Well...I guess it's nice that Ji-hong is such a supportive boyfriend to Hye-jeong. He doesn't validate all of her at times vicious actions, but Ji-hong does work to support her in the best way he can. It nonetheless feels strange, though, that Hye-jeong seems to deserve all this loyalty from her fellows just because. One would think Hye-jeong had been working at the hospital for a long time, rather than being a relatively new recruit.