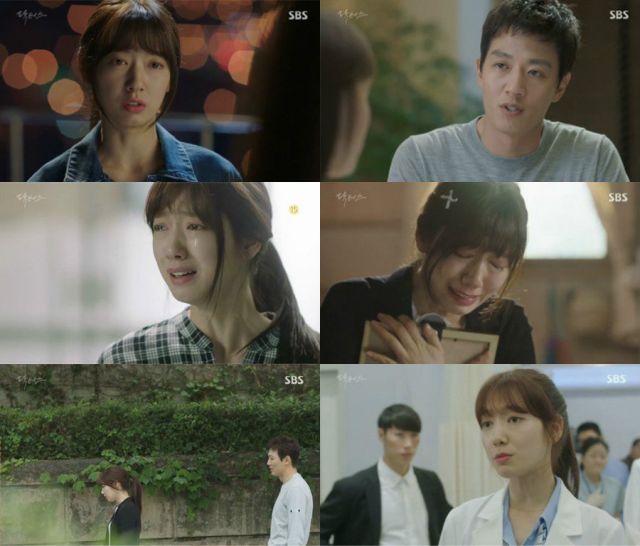 Upon further consideration Ji-hong is...really not a very good teacher. Sure, he's cool and hip. But the man's advice is frequently filled with mutually incompatible platitudes rather than anything useful. Most importantly, though, Ji-hong is really bad when it comes to the idea of taking responsibility. Most of his screentime here is spent trying to obfuscate or avoid acknowledging any kind of personal error. That's not setting a good example, although fortunately the female characters in "Doctors" are able to manage all right on their own.

Hye-jeong is, as expected, a real trooper. Having already determined to live a virtuous life, Hye-jeong takes the rap for the big accident last cliffhanger knowing full well that of the three girls she bears the least responsibility for what happened. This is more of the same selfless behavior we saw Hye-jeong exploring last episode, and given how generally fearless the girl is, the attitude suits her well. The way Soon-hee and Seo-woo react to Hye-jeong's act of sacrifice is also telling of their characters, revealing the awkward place they stand between familial obligation and personal responsibility.

In fact, personal responsibility is so thoroughly explored here that I'm pretty sure this is going to be the main overall narrative arc, although not always for the better. Events this episode imply that a sick person can make themselves well at least partially through willpower, and that it's sensible to hold a doctor personally responsible for failure if surgery doesn't work. This is really not at all a fair assumption to make, and it only makes sense because we witness events that Hye-jeong does not.

A lot of this is because the production team is setting up some characters as clear villains. While this is understandable it's also a little disappointing. I was impressed that "Doctors" did not make Seo-woo into a clear-cut antagonist even though that's the most obvious direction to take her character. Evidently Lee Sung-kyung has fairly good range.

Overall "Doctors" is shaping up up to be fairly strong if somewhat flawed exploration of ethical issues in doctoring, with the widely diverging life stories of the main characters being the main focal point. It's an interesting contrast to be sure- Ji-hong being forced out of job he wants to do so that he can instead do the one he's better at, while Hye-jeong defies destiny with powerful screen presence. There are a lot of ways this story can end up moving.