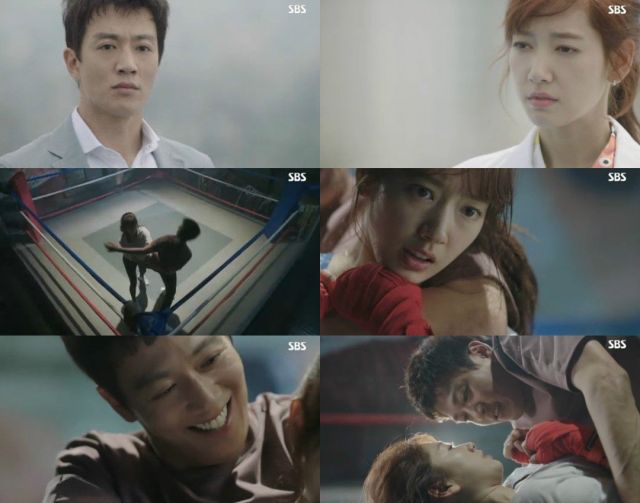 Upon closer examination, it turns out that Hye-jeong has gotten a tad bitter over the timeskip. Her temperament is as bad as it ever was, but now she has the excuse of being a medical professional. It's one thing for Hye-jeong to mouth off against belligerent gangsters. Fellow doctors are a different matter. Yoon-do (played by Yoon Kyun-sang) is clearly doing the best he can, and it's not fair for Hye-jeong to have such a huge superiority complex.

"Doctors" is skirting dangerously close to wish fulfillment territory, although as of yet it's not clear where Hye-jeong's professional personality falls on the line between quirk and flaw. The shiny, sunny Hye-jeong is still very much a character, it's just we only ever see her that way with Soon-hee, who isn't a doctor. Hye-jeong also condescends somewhat to the more junior doctors on staff. Cute as these scenes are they're clearly indicative of a lack of mutual respect.

Which brings the story back around to Ji-hong, who is unchanged by experience. I do not consider this a good thing. Ji-hong's brand of teacherly condescencion is annoying in its own way- he treats Seo-woo and Hye-jeong like they're still his students, without really acknowledging that since they last met Seo-woo and Hye-jeong have become well established medical professionals. This, too, straddles the line between flaw and quirk, to the extent that I'm not really sure which way we're supposed to be interpreting it.

These creative choices puzzle me. I don't especially want to harp on the whole creepy teacher/student dynamic since that's all in the past, but it's pretty hard to forget about that when Ji-hong insists on acting like he's still Hye-jeong's teacher. Practically the minute Ji-hong steps off the helicopter he comes on to Hye-jeong and I'm just thinking, uh, do you really want to start off your tenure here by creating possible grounds for a sexual harassment lawsuit? Later on he even manages to attack her.

I don't want to sound too negative because really, "Doctors" is generally well made and enjoyable to watch. The actual hospital work is very dynamic and tense- I like how the patients come off more as problems to be solved then people, because that is in fact how the doctors see them. This in turn informs each doctor's professional philosophy, which are all defendable in their own ways. I want to see more legitimate struggle between these ideas. I don't want to see Hye-jeong always be right simply because she's the main character.