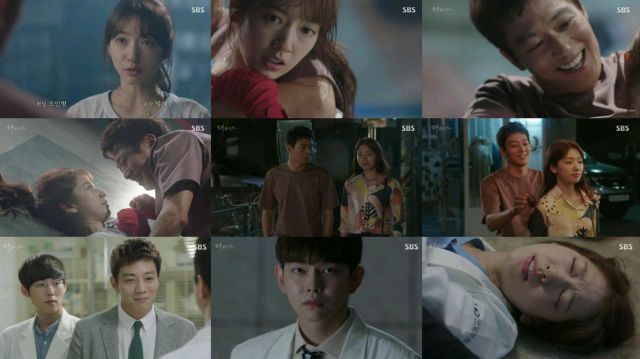 With this episode "Doctors" takes an unfortunate step towards unwanted perfection- Hye-jeong is super talented, right about everything, and only ever faces resistance by mean-spirited people who are either outright evil or secretly harbor a romantic crush. We're at the point where Hye-jeong's only conceivable flaw appears to be that she's too awesome. What happened to the bitter jerk from the first episode who engaged in petty shoplifting just for the fun of it?

My main issue with this tonal movement is that it's very boring. Exactly one scene shows promise of dramatic tension- I was briefly thrown into alertness when something seemed to go wrong but as expected Hye-jeong is able to pull through right to the end. Given that Hye-jeong's whole raison d'etre is to be the very best doctor there ever was, I'm surprised she didn't relish the challenge. My best guess is because if Hye-jeong was shown enjoying this too much, we might agree with Yoon-do that she's arrogant.

Ji-hong's character has also fully embraced the Hye-jeong-centered galaxy about which the plot revolves. He has no apparent motivation except to help Hye-jeong be the very best she can be. The teacher/student element bothers me less now because I see Ji-hong as representing a more shallow archetype- the teacher so enthralled by Hye-jeong's awesomeness that of course he wants to be together with her. And as her former teacher, from Hye-jeong's perspective, he's the highest ranked potential suitor available.

I'm probably being a tad harsh, but there's so little going on with other subplots there isn't really anything else to discuss. While all the other doctors have distinct personalities to date none of them have really done anything except get involved with minor mischief that lacks payoff. The politicking in regards to the balance administration has to strike between ethical good and profitability is kind of interesting, but the same subplot shows up in nearly every medical drama.

It's possible I might have set my standards a tad too high after the strong opening episodes of "Doctors". It's not like the drama is unwatchable or anything- the production values are fine, it's just that the lack of meaningful conflict is very, very dull. While "Doctors" has one of the best fonts I've ever seen for explaining medical terminology, a good typeface can't change the general impenetrability of dry medical terminology. Which is a pretty good metaphor for how I'm seeing the drama as a whole right now.