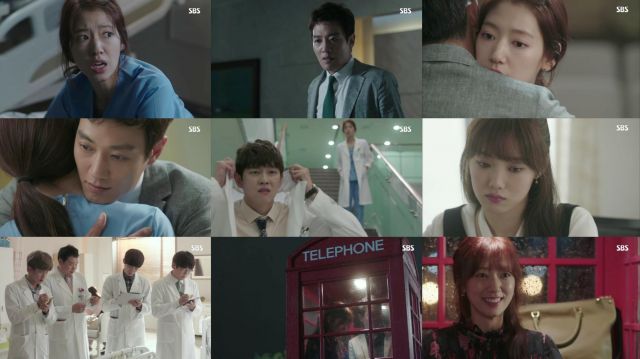 We get a brief glimpse of Ji-hong's deeper darker motivations in the opening set this episode. The short of it is that Ji-hong had reasons to get involved with medicine that did not involve the birthright of his adopted family. I like these moments where we see the way Ji-hong interacts with other people without it all having to tie back to Hye-jeong somehow, because they give a better sense of who Ji-hong is a person aside from just the usual charm.

I yet remain less than enthralled with the overall direction in "Doctors" because of the lack of major ambition with the story. Although that's a bit of a glass half empty or half full proposition. If there's no focus on making the plot overly complicated, that's less time being spent creating arbitrary obstacles to the central loveline which makes "Doctors" quite a bit more streamlined than the usual drama when it comes to the balance between happiness versus struggle.

But the vague and undefined nature of the conflict can still be fairly difficult to grasp from an analytic perspective. I'm not all that sure where Hye-jeong's allegations of conspiracy are going to go in the long run. It does seem rather telling that while Hye-jeong's words and actions constantly state that investigating the cause of her grandmother's death is the top priority, she's able to quickly forget her quest for vengeance any time Ji-hong starts making cute faces at her.

Other characters remain generally appealling. I rather liked Seo-woo's scenes with the bitter patient, although the ultimate outcome has the odd effect of showing Seo-woo reacting in a very human way to the kind of situation that comes up in hospitals all the time. It begs the question of how much or little experience Seo-woo really has in the field. But it also begs the question of why Hye-jeong is so consistently stiff.

Admittedly Hye-jeong does get her own bitter patient with which to explore this conflict, for which we'll have to wait longer for a payoff. I think, actually, that this specific kind of delay is what's been leaving me less than impressed with the progression of the Ji-hong/Hye-jeong relationship. Sure they can kiss, united in a search for truth about family. But they never discuss really romantic stuff, like why family is important in the first place. For me, that makes it seem like their relationship has only scratched the surface- even if there's plenty of time to dig deeper.