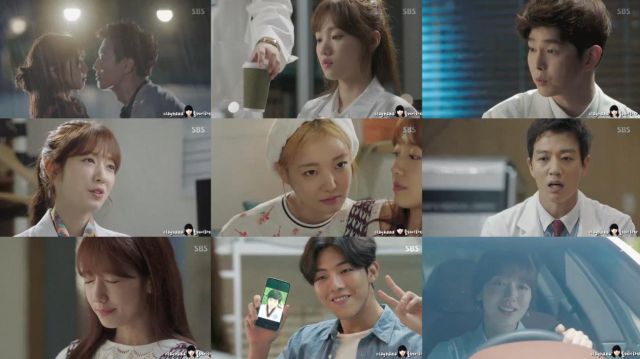 The opening scene for this episode depicts Hye-jeong as a child listening to a fight between her father and a woman who is either Hye-jeong's mother or her stepmother. It's unclear. While the scene is effective in establishing context for Hye-jeong's actions immediately after her kiss with Ji-hong, the lack of full context illustrates the main greater problem in "Doctors". The drama never quite gives us all the information necessary for the story to be fully satisfying.

Instead, there's disproportionate focus on romance. Even actual surgery is important less because people's lives are at stake and more because who gets what specific assignment can be interpreted as a form of special favor. While I didn't mind the doctors' detached attitude before, we get a lot of backstory on the main patient here, to the point she could be a starring character in her own drama. In that context, Ji-hong's mechanical smiles comes off as rather discomforting.

Weirdly enough the main character I keep sympathizing with is Seo-woo of all people. Where everyone else is too half-distracted with doctor stuff to pay attention to personal lives, Seo-woo is completely focused on romance. It really sucks for her to be putting all this effort in with Yoon-do and getting nowhere, but Hye-jeong makes an active effort to avoid these entanglements and has gotten Yoon-do wrapped around her finger apparently by complete accident.

Seo-woo calls attention to the way "Doctors" is structured around making Hye-jeong look good in a way that rather damages the drama as a whole. The return of Soo-cheol (played by Ji Soo) initially seems to fall in to this same pattern. Eventually we find out his motives are quite casual, which is an enormous relief even if Ji-hong and Yoon-do are unlikely to find out about this for some time. But even then the final scene manages to veer into predictable emotional overkill. It figures that the one time "Doctors" manages to come up with an appropriate song it was of course intended to be ironic.

I really wish we could get more exploration of Hye-jeong's other character traits aside from "men find her attractive". It's just so redundant. Why bother hiring Park Shin-hye if so much of the script is going to be dedicated to telling us, rather than showing us, that she's charming? There's so many better places to go. This whole time Hye-jeong has apparently had an admiring stepsister- why can't we spend more time on that?