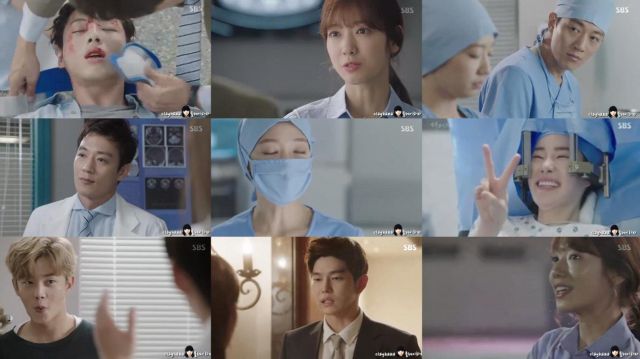 Having apparently realized that too much energy has been extended on social relationships lately, the production team dedicates much of this episode to actual doctoring. First there's the accidental crisis Hye-jeong and Soo-cheol created by failing to observe proper traffic safety precautions, then there's the more built-up storyline regarding the prospective Olympic archer. Both operations go relatively smoothly with no real hitches.

"Doctors" is passable entertainment if that's all you're really looking for- just a bunch of actors putting on white coats and playing at being medical professionals. But the drama's lack of ambition to do much more than that is unavoidably off-putting. While the whole notion of wide awake hand surgery is interesting, it's the kind of general interest topic that's more well-suited to a magazine article or a public news report than it is to narrative storytelling.

The only character that has anything approaching a genuinely interesting arc is, once again, Seo-woo. Unlike Hye-jeong, Seo-woo is capable of failure and making mistakes, and watching Seo-woo struggle with these decisions is fairly dramatic. It also feels more than a little unfair. I'm not a doctor, but given the information we were presented with, Seo-woo's medical opinion seemed perfectly reasonable, and in medicine like in any other field, dissenting opinions are important even when they're wrong.

It frequently feels like Seo-woo is given the cold shoulder by other characters less due to personal failing and more due to how she has the temerity to contradict Hye-jeong. The implications of this are especially unfortunate because Ji-hong and Yoon-do are both gunning for a relationship with Hye-jeong. Not only is this technically sexual harassment, but it's also an effective legal argument for clouded judgment. If we ever get to a situation where Seo-woo is right and Hye-jeong is wrong, this favoritism could be used as a cudgel to attack them the same way they hit Seo-woo.

Granted, Seo-woo has her own surreptitious romantic motive. But I'm inclined to view her actions more favorably because at least Seo-woo's romantic aspirations dovetail with trying to create a better working relationship between hospital administration and hospital staff. It just strikes me as massively unfair that after her role in Soo-cheol's accident, at the end of this episode Hye-jeong gets yet another carefree romantic adventure with Ji-hong while Seo-woo is left crying into her phone when a badly timed text appears to have been perfectly designed to mock and humiliate her.