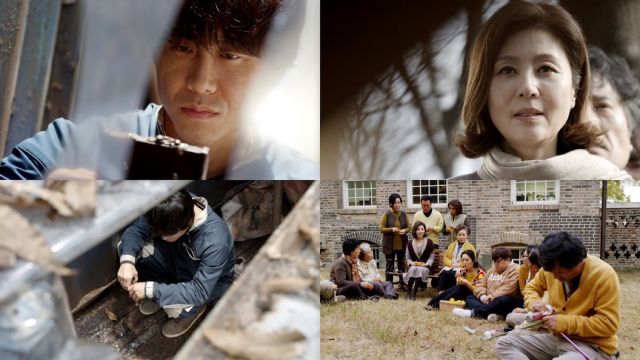 The year is 2025 and Jin-seong (played by Oh Jung-se) works for a company whose job it is to monitor random people for random reasons, part and parcel for what appears to be an elaborate police state. Given the overwhelming presence of CCTV in South Korea and the always-improving nature of surveillance technology, this look into the not-too-distant-future isn't as implausible as it may seem. Although what really gives "Drama Special - Contract Man" an Orwellian vibe is the way it compares the concept of a police state to a mental institution.

That's what Jin-seong's job is for the moment. He's supposed to track Soo-yeong (played by Choi Myung-gil), who runs a mental institution and keeps it under control with similar methods to what Jin-seong is using to track her- except even more harsh and extreme. It's Soo-yeong's job to help keep mentally ill people happy. And really, these days, with depression the way it is in developed countries, aren't we all just a little bit mentally ill?

What makes the atmosphere in "Drama Special - Contract Man" so disturbing is that it is, from our vantage point, low-tech science fiction. Nothing that happens physically is all that implausible. When the drama does veer to more implausible adventures in the latter portion, the very implausibility of these late events is precisely the point. As the director of a mental institution Soo-yeong, in some very concrete ways, controls reality.

It's a factor of mental facilities that's often forgotten- most of the patients are there willingly. For a general minimum level of comfort and happiness most people are willing to tolerate quite a bit of discomfort and even straight up refuse to acknowledge a certain level of reality. As the man who can see through the illusions and knows what reality actually is, Jin-seong would seem to be the strong-willed hero. But in truth, Jin-seong is the craziest one of all- defined by arbitrary social normalcy, you have to understand.

"Drama Special - Contract Man" is a criticism of the police state which pretends like it's not, because certain specific trappings aren't there. If we aren't being pushed around by nominal leaders, and it's for our own good, that means the system is inherently just...right? Director Lim Se-joon presents a reality that exposes these concepts as arbitrary social constructions. In the world of writer Lim Ye-jin, what matters isn't the letter of the contract, but the spirit. And power belongs to those who get to interpret.