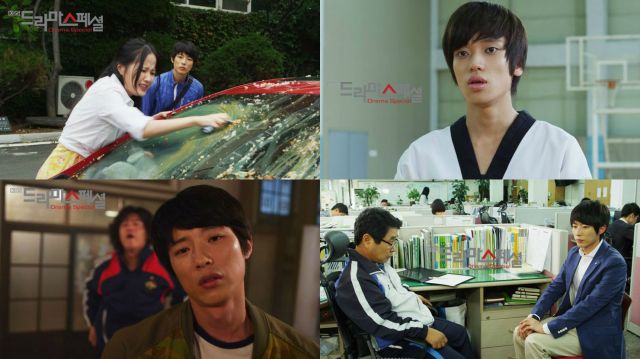 Errol Flynn was, all appearances to the contrary, actually quite incompetent at fighting. His appearance in film as a master swordsman was actually due to the efforts of the stuntmen he was always fighting against, who did know what they were doing and thus knew the best way to make Errol Flynn look competent. Most action movie heroes, from past to present, fall into the same basic pattern. But as I'm sure you're aware, we only know who Errol Flynn is. nobody knows about the other guys that made him look good at his job. It's thankless work.

And that brings us to Do-hyeon (played by Im Ji-kyu), who has this as his core conflict. Well, that and the fact that he looks way younger than he actually is. Do-hyeon just can't get anyone to take him seriously, and over the course of "Drama Special - Do You Know Tae-Kwon-Do?", he attempts to come at peace with this by just doubling down on his outrageously defensive Tae-Kwon-Do technique until somebody finally gives him some respect.

In the immediate sense this drama is philosophical. Considering the basic action elements essentially at play here, this is important. In the real world, fights are bad and something we should avoid. So, too, does Do-hyeon reject trying to gain respect through violence, instead focusing on the basically defensive techniques he's trained in, emphasizing practicality over coolness.

Ironically the drama still makes Do-hyeon's brand of Tae-Kwon-Do look incredibly cool- the action scenes are great, but it's really the underlying point that we need to consider more seriously. The best defense is not a good offense. Focusing on offense blinds us to our own vulnerabilities. It's all about keeping stable and not losing sight of the situation. There's times where the combat almost comes off as smug, except that the action makes it all too clear that Do-hyeon isn't even putting that much effort into it. That's the whole point. Acting overconfident and invincible is how you get taken down.

This intriguing blend of exciting action and philosophy are by far the strongest suit of "Drama Special - Do You Know Tae-Kwon-Do?" The rest of the storyline, while reasonably entertaining, isn't constructed in as impressive a manner. It's just a pretty well-worn tale about rebellious students and frustrated teachers and how to move on from minor personal insults and agitations. Still, excellent choreography plus an average narrative still combines to make some pretty fun stuff.