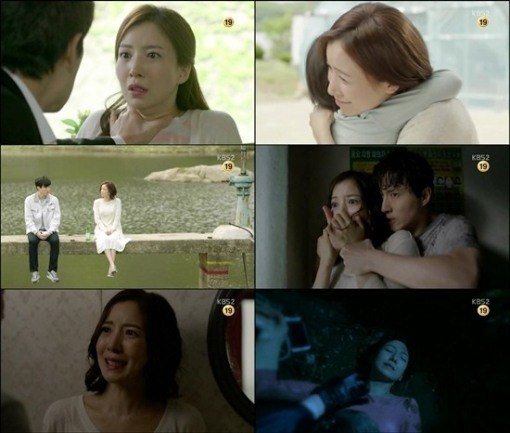 Joon-gil (played by Yang Jin-woo) really is a luckless man. The ending is somewhat happy, I suppose, from a certain point of view, but it's hard to ignore the general stench of failure that surrounds Joon-gil. Practically every conversation he has here is some sort of negotiation, but these tend not to be successful operations. That kind of thing is unsurprising given Joon-gil's apparent abilities.

"Drama Special - Dreaming Man" has a pretty standard concept. A man with apparent knowledge of future events has to work to keep those events from coming to pass. He faces obstacles on the way. The concept is a very strong one. It allows for a dynamic series of events to ensue as he attempts to meet this goal. The narrative is deliberately structured in such a way as to maximize emotional impact for those few intense scenes when it's almost time for a major shift in the timeline to come into action.

While the drama's able to a decent enough job hewing to the basics of this narrative, it's also a fairly signifcant weakness. For one thing, describing anything that happens here runs the risk of being a giant spoiler. The only way to really enjoy "Drama Special - Dreaming Man" is to be sucked in by the twists and turns of the plot. Most of the impact of each successive revelation is based on the fact that we don't know what happened before.

This all makes for a nice enough short action yarn. Writer Yoo Jeong-hee probably made a point here of proving that she can write this kind of story for future employment reference. The continuity is fairly tight, and the characters do a decent enough job of inspiring empathy with their situation. The result is a final product that, when abstractly described, sounds pretty neat. Director Lee Eung-bok has a good sense of how match the beats of the writing, and the result is pretty solid as a result.

The only real problem is, I don't know...a kind of emptiness I guess? There's usually a broader, strong emotional point in Drama Specials. Even the ones that genre bend into action, comedy, or horror tend to have some sort of clear broad reason for existing. By contrast, "Drama Special- Dreaming Man", seems to be satisfied just being a decent amount of fun connected with quality production values. I admire competence- the trouble with it is that competence alone is difficult to get excited about.