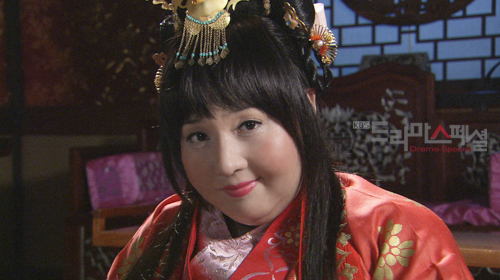 Princess Hwapyeong (played by Eugene in a fat suit) thinks she's met the man of her dreams, only to realize that she's so horribly overweight and unlovable that he has no interest in her, and has even resorted to checking out other women. Princess Hwapyeong, being a princess and at least making an effort at being a kind person, attempts to save the marriage and her husband by undergoing a weight loss regimen.

This is, to be clear, a comedy. The tone for that is set well enough early on whe Princess Hwapyeong attempts to do dignified princess stuff only for it to fail because, well, she's not that kind of princess. Nor is it that kind of costume drama- in its most inspired moments, "Drama Special - Hwapyeong Princess's Weight Loss" does montages coupled with modern rap music. The blending of old and new is about as weird and it sounds, and makes for the drama's greatest appeal.

Its deeper thematic elements aren't quite so unique. Whereas "200 Pounds Beauty" had obvious satirical elements at play regarding the way perception plays with the way we treat other people, "Drama Special - Hwapyeong Princess's Weight Loss" is a much more straightforward tale of how true beauty is on the inside, and the people who can't recognize that are jerks who aren't worth your time. Obviously Eugene looks a lot better without the fat suit but the ending at least pays lip service to the idea that Princess Hwapyeong deserves dignity regardless of the way she looks.

In a really stretched interpretation, the drama's also saying that what's really important in love is to have someone who can directly inspire change via direct encouragement rather than just sneaking around surreptitiously. Once Princess Hwapyeong starts to look like Eugene, her attitude also changes markedly. She decides to pick better battles, and live for something more noble than the love of a man, even if that's at least a partial motivation.

Also there's jokes. It's a romantic comedy- what did you expect? "Drama Special - Hwapyeong Princess's Weight Loss" mostly coasts by on strength of its concept along with various visual flourishes to give the impression of a mildly adult fairy tale. It's not really that objectively impressively, and some of the plot points linger on a bit too long when the story direction is pretty predictable. Regardless, the drama succeeds in its basic goals, and should not be faulted for that.