[HanCinema's Drama Review] "Drama Special - If We Are Seasons" 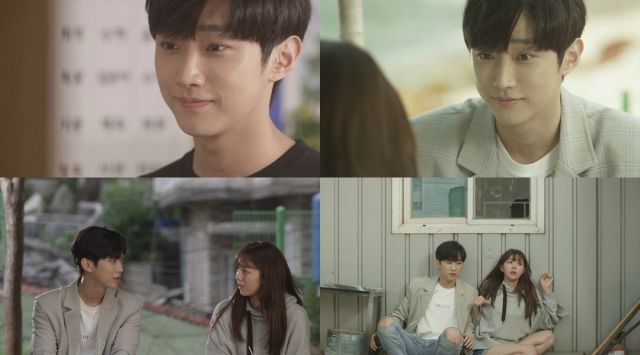 For the opener in this season's drama specials, KBS is playing it safe with "Drama Special - If We Are Seasons", a fairly standard no-frills nostalgic high school melodrama about Hae-rim (played by Chae Soo-bin) and the cute boys in her life- long-term friend Gi-seok (played by Jang Dong-yoon), and recent transfer student Dong-kyeong (played by Jin Young). The melodrama arrives in its own good time- but it is of little imminent concern with Drama Special - If We Are Seasons", which instead focuses on the love triangle until the melodrama finally pops up.

The immediate striking part of "Drama Special - If We Are Seasons" is the adorably nostalgic presentation. Right from the first scene we have the cheerful camcorder, the ensuing chat about the possibility of meeting pretty girls at school, then a beautiful cherry blossom filled day on the way to school, and bliss from that moment immediately undone by an unforeseen violent disaster. Then there's that magnificent slow-motion mid air shot...

Yes, these are all obvious clichés. But they're clichés for good reason. Director Kang Soo-yeon-II has an almost perfect mastery of montage to show us in a short time an entire childhood's worth of adorable moments. "Drama Special - If We Are Seasons" is less about being the story of Hae-rim and Gi-seok and more a general reminder of our own experiences being young, inexperienced, and surprisingly direct with our feelings. Everything about the various character conflicts are so mild, so easily defined, and so obviously petty, it's hard not to smile at the silliness.

That there is so little direct talk of love, because it is shown with actions rather than words, is another hallmark. We love and root for Gi-yeong entirely because he is showing genuine affection to Hae-rim throughout while not putting any apparent thought into how Hae-rim interprets his actions. That's why he consistently comes off as honest, because Gi-yeong demonstrates similar tendencies toward horseplay with his obviously platonic male friends.

It's not that Dong-kyeong is a bad guy or anything. "Drama Special - If We Are Seasons" is more an analysis of nostalgia in general, and provides a convincing contrast between the boys we think are cute at the time and the ones whose attitude actually inspires more genuinely fond memories. What it lacks in originality "Drama Special - If We Are Seasons" more than makes up for with almost perfectly designed production values and a magnificently engaging cast.

"[HanCinema's Drama Review] "Drama Special - If We Are Seasons""
by HanCinema is licensed under a Creative Commons Attribution-Share Alike 3.0 Unported License.