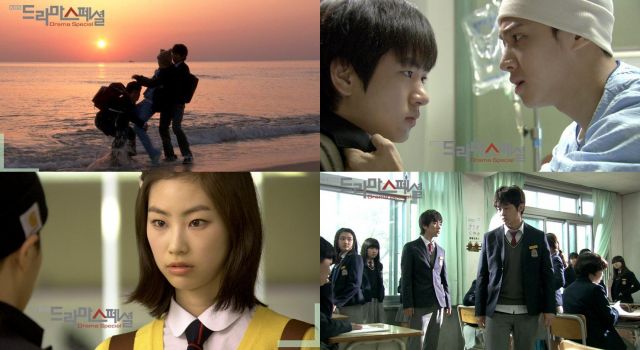 From the very beginning, it's clear that leukemia patient Kyeong-sook (played by Lee Gi-kwang) probably doesn't have that much time to live. The way "Drama Special - My Friend's Still Alive" is always hovering right behind this sense of mortality is incredibly dark, especially considering how much of it is structured as a comedy. For the most part these are just normal high school antics dressed up with Kyeong-sook's final desire as a framing device.

It's from here that the particular beauty of this drama special becomes evident, because given that the characters are high school students, the fact that one of them just so happens to be facing death straight in the face doesn't somehow make them all magically more mature. Kyeong-sook's last wish is a frankly goofy one. But he can be forgiven for asking for it, because when it gets right down to it the guy's just a kid.

Normally this would be a simple job for the Make-A-Wish Foundation, but this drama hits much stronger emotional territory by having the task fall upon Kyeong-sook's friends, Chi-hyeon (played by Lee Joo-seung) and Myeong-soo (played by Kim Chang-hwan). For Chi-yeon in particular there's a serious immediacy to Kyeong-sook's request that requires he do things most high school students would find unbelievably terrifying. But that doesn't matter to Chi-hyeon, for the simple reason that Kyeong-sook is his friend, and that's what friends do.

There's a childlike simplicity in the rationales used here, so when the storyline inevitably takes a turn for conflict, and Chi-yeon ends up resenting his dying friend, there's surprisingly little vitriol in these dramatic developments. A more bombastic plot would get overdramatic in these moments, and let the storyline turn into a serious life lesson about the terrible things that happen when people behave selfishly. And kids, don't do that.

But "Drama Special - My Friend's Still Alive" has a much more refreshing take on the true meaning of teen friendship. It's not just a matter of subterfuge. There's also the surprising sense maturity derived from characters actually trying to understand the situation from one another's point of view, and turning away from anger because, you know, life is short and can end at any minute. The time will come when we have to move on and all that will be left will be those memories, so we're best off trying to make them count. There is, by definition, a sadness in this drama's ending- and yet even in that final moment, there's this strong touching warmth about being able to forever cherish that special love Kyeong-sook wanted to experience so badly.