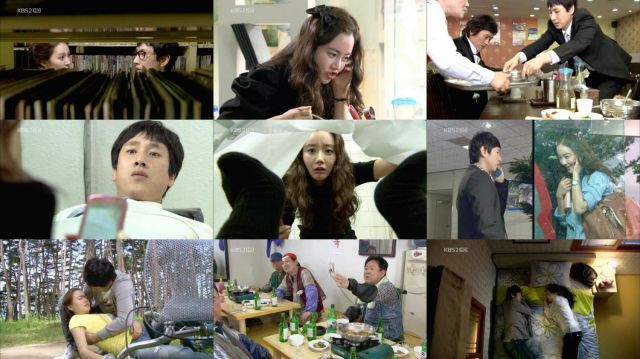 Dong-chan (played by Lee Sun-kyun) is the kind of man who's destined to suffer indignity because he's always so dignified so much of the time. The accident wasn't bad enough, the humiliation wasn't bad enough, no, it also turns out that nobody at work can function unless Dong-chan's around to keep order. It's no wonder the man hates fun so much, even when women come on to him for no apparent reason.

Then he meets perky reporter Nam-hee (played by Hwang Woo-seul-hye) and...well...nothing changes really. Dong-chan still suffers from the usual indignities. Nam-hee is aggressive and shows little respect, yet at the same time she's very photogenic and fun to be around so it's time for reporting hijinxs. As is mentioned at one point, the crew needs to have some sort of public interest story to air on the news later, so that's what they do.

Personally speaking I never really get much emotional feeling out of these kinds of stories. Maybe it's because all the people I meet in my daily life are too independent to ever allow themselves the moments of genuine vulnerability that Lam-hee exposes to Dong-chan. Is that what love is? To seem so trusting that a normally closed off person is willing to admit to some level of physical attraction, and maybe even help out in other deficiencies? I have to admit- the prospect of someone teaching me to ride a bike sounds pretty romantic. That may just be because I never learned though.