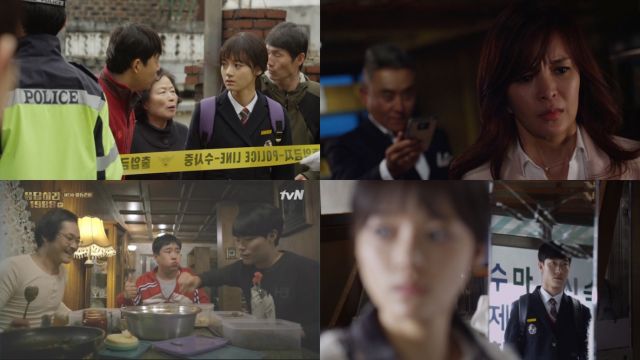 Ji-hye (played by Shin Eun-jung) is a consultant who helps parents get their kids into prestigious schools. Ji-hye's own son Seon-woo (played by Kwak Dong-yeon) has been a beneficiary of Ji-hye's talents. But matters take a turn for the sordid when a blackmail attempt result in Ji-hye completely covered in blood, rather at a loss as to what she should do having just killed a man.

I think "Drama Special - Pa" is attempting to provide some sort of commentary on the cutthroat world of Korean education. One of the weird initially inexplicable plot points is that Gi-cheol (played by Kim Kyu-chul) has decided to cooperate with the police by confessing the murder which he knows full well was actually committed by Ji-hye, and which he can easily prove. For that matter, we eventually find out that initially Ji-hye herself just wanted to go see the police. So why didn't she?

Well, that's where the social commentary comes in. Unfortunately any meaningful statement about the Korean educational system is mostly undone by director Kim Sin-il's insistence on a deadpan thriller tone. The basic plot of "Drama Special - Pa" is, to put it simply, just too absurd to be believable as serious drama. Seon-woo's generally nonchalant reaction to the discovery of his mother covered in blood is the main essential plot point, and through this, writer Yoo Jeong-hee appears to be condemning the warped moral attitudes kids these days seem to be learning.

In a satirical presentation this could potentially work a lot better- especially since the characters are little more than cardboard cut-outs. Take the dead man, Tae-man (played by Choi Joon-yong). He swaggers about the screen exultantly with no apparent sense of shame. His wife (played by Ban Mi-jeong) is about as comically smilingly cold-hearted as Tae-man is, and by the end of the drama her attitude even manages to exceed that absurdity.

I really do wish there was a satirical tone here, because most of the cast really doesn't seem to have any idea what they're supposed to be doing with themselves here. Time and again a character is floored by a major revelation and the actor manages to avoid giving much of a reaction at all. It's just too hard to visualize "Drama Special - Pa" happening in the real world. When a major plot point involves the specific location of a bloody shoe, well really, do I even need to finish that sentence?