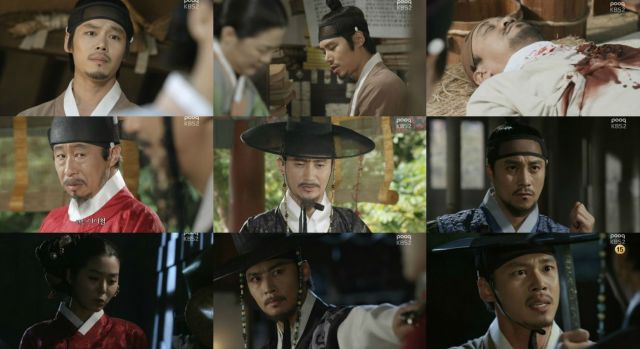 Soo-han (played by Han Joo-wan) is a fervent scholar, doing as much reading and research as he can. Weirdly, even though "Drama Special - The Search for Battle" is set in the seventeenth century at the height of Confucian thought, the question constantly comes up as to why Soo-han even bothers. He lives a culture that venerates education and free-thinking in theory, but every time he tries to apply this knowledge practically the authorities in power attempt to brutalize him.

"Drama Special - The Search for Battle" reunites the production team that gave us "Drama Special - Illegal Parking" earlier this year, and while the satire is a lot more subtle here, it's just as difficult to ignore. Soo-han has some very thoroughly modern ideas about justice and investigation, and seems like the kind of talented mind society should encourage. But by the end, the system remains completely intact with only the memories of bygone heroism left to inspire us.

In many ways this drama is the practical inverse of the usual costume drama. The storyline never gets super grim- but in spite of the lovely costumes there's this constant sense that seventeenth century Korea was not at all a fun place to live. By a wide margin, Soo-han is best able to find happiness when he avoids trying to engage the system and just live happily on his own terms.

It's an especially odd tone to strike because while Soo-han's quest for the truth is a perfectly reasonable one, as the title notes, he is in fact pretty much looking for a fight. It doesn't matter whether or not he's doing the right thing. The fact of the matter is the system is a meat grinder designed to tear apart people like Soo-han. He does eventually manage to accomplish something just by refusing to knuckle down, but Soo-han is still just one man struggling with very little support against a huge machine.

This makes for a fairly intriguing story, and one of the best uses I've ever seen of the Drama Special format, since this idea really probably wouldn't work that well if stretched out beyond the usual hour. But even beyond the narrative peculiarities, "Drama Special - The Search for Battle" is excellent if only from an aesthetic standpoint. Just look at those costumes and backdrops. Beauty like that is enough to make a person feel a little guilty- sure the system might be rotten, but everybody just looks so cool.