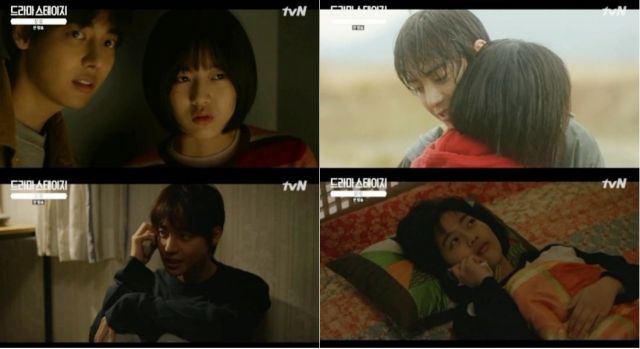 So-i (played by Shin Eun-soo) is, in the modern day, an English teacher for private academies. The work is degrading and generally pointless, so it's with sincere joy that So-i comes homes to open a package from family in rural Nonsan. So-i wasn't actually raised out there. She just ended up stuck in the area for awhile because of issues with her mother. All the same, So-i's happy nostalgia flashbacks revolve around the Nonsan years, which is especially interesting when we look back to see what a brat So-i was.

The main narrative of "Drama Stage - Anthology" is just about So-i growing up (metaphorically) in Nonsan and realizing the world does not revolve around her. This process takes quite awhile, and the main obstacle is always So-i's own stubborn pigheadedness. Even granting that Nonsan is not the most exciting location in the world, So-i repeatedly wallows in denial rather than acknowledging the reality of her current living situation, even though So-i has definite advantages.

Observe how all the other students automatically think that So-i must be cool solely because she came from the city. The girl has her own portable music player. While that seems unremarkable today, back in the bygone year of 2002 they were apparently so rare that even So-i's teacher fails to realize that So-i is showing open disrespect in the classroom. The parallel with the scuffle that is the drama's opening scene is so obvious the irony is just dripping.

Unfortunately "Drama Stage - Anthology" has almost no interest in its own framing device. Indeed, the main purpose of the framing device appears to have been to spoil the ending. We know that So-i can't have gotten together romantically with the other cool Nonsan student, Hyeon (played by One) because he doesn't show up in the present day. This is an oddly fatalistic statement for the drama to make, since otherwise the story is a pretty standard country romance.

Like most of the other Drama Stage productions this year, "Drama Stage - Anthology" is limited mainly in that it only tries to be a fairly simple genre story. There are so many interesting thematic angles that could be tackled through the narrative device of a city girl forcibly translated to rural South Korea circa 2002 that I was frustrated mainly by the production team's apparent disinterest in dealing with anything other than romantic nostalgia. If that's all you want, "Drama Stage - Anthology" will get the job done, but it's not a story for the ages by any means.