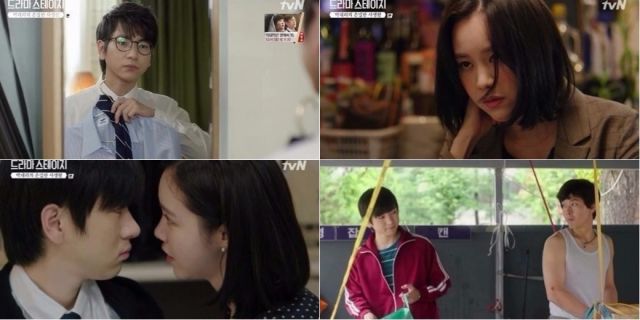 Jong-hyeok (played by Lee Joo-seung) works at a normal office job during the daytime, but in his private life, the man is a hit novelist. Jong-hyeok wants to keep these aspects of his life separate, for some reason. And right there is where "Drama Stage - Assistant Manager Park's Private Life" has its biggest problem. I don't have a clue why Jong-hyeok wants to have a secret identity. I especially don't know why he wants to work a normal office job. We learn surprisingly little about what kind of a person Jong-hyeok really is considering the sheer wackiness of the set-up.

"Drama Stage - Assistant Manager Park's Private Life" invests a lot into Jong-hyeok's secret identity dynamic. Unfortunately, the drama fails to realize that from a storytelling point of view secret identities are only interesting when they allow for the same character to inhabit two different narrative roles. That both of Jong-hyeok's jobs involve him doing a lot of writing means that company man Jong-hyeok and novelist Jong-hyeok are mostly the same person, whose only conflict is Jong-hyeok's arbitrary decision to lead a double life.

Beyond that the only real plot going on here is the mild romance between Jong-hyeok and his subordinate at the company Yoo-rin (played by Jo Soo-hyang). This is largely undone by a lack of chemistry between the actors. Weirdly, Lee Joo-seung actually has much better chemistry with Kim Ye-won, who plays Jong-hyeok's editor Bo-min. She gets some laughs by frequently and comically ignoring Jong-hyeok's specific instructions not to contact him during the daytime.

Even the ending accidentally acknowledges the basic flaws in the drama's premise because the main significant change to Jong-hyeok's life is that the relationships have been rewired to make more intuitive sense. Was the actual journey about Jong-hyeok being confident enough in his novel-writing ability to not think he needed a regular company job? Maybe, but this was not at all well communicated in the dialogue.

In stark contrast to this year's drama specials on KBS, which featured highly relatable characters with unenviable employment situations, tvN's Drama Stage series immediately gets off on the wrong foot by making its main character too successful for no apparent reason. Jong-hyeok sees both of his professions as pure abstractions, rather than something he needs to do in order to survive in today's cutthroat economic environment. Consequently, "Drama Stage - Assistant Manager Park's Private Life" is all concept and no impact.