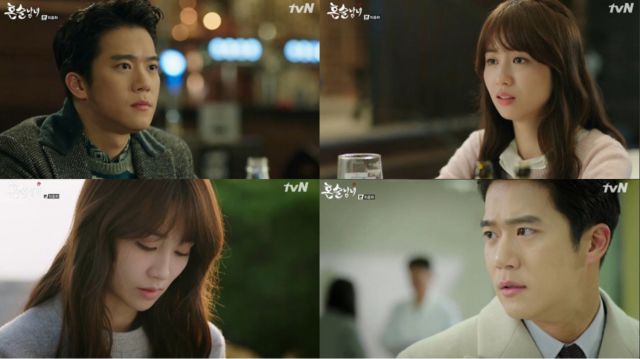 It's rather fitting that the relationship between Jeong-seok and Ha-na ends in much the same way that it began- with the two alleged leads making little meaningful contact with each other. It's rather telling how the romantic callbacks for these two kept referring to the same small batch of scenes, many of which were only a couple of episodes ago. Their love story is one with rather little cause, which makes it difficult to celebrate.

By way of contrast, even though their romance is truncated to say the least, Jin-i and Jin-woong both manage to reach a fairly convincing climax in the car scene. Jin-i expresses her deep dark fear of being judged undesirable, where Jin-woong similarly confesses at how worthless he has felt in the wake of his mother's death. Both of these are developed characters arcs and I was genuinely impressed with how impactful the airing of these insecurities played out. 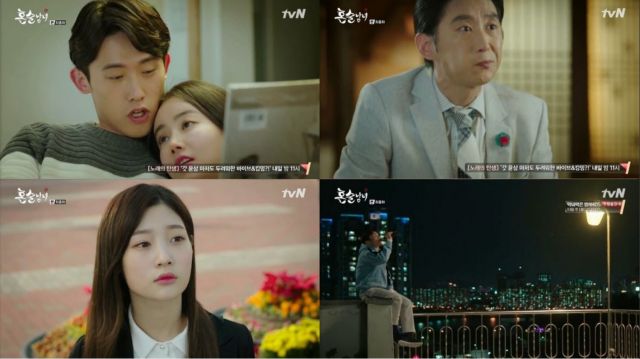 But try as I might I just can't get behind Jeong-seok and Ha-na as a couple. Ha-na talks with Myeong more than she does his older brother this episode. And you know, if we were to line up all the scenes one by one, I think Myeong and Ha-na have had way more screentime than Myeong and Jeong-seok. That's not even taking into account how Myeong's scenes were always a lot more genuinely flirty, simply because the younger man can go a few sentences without talking about "quality".

As for the students, they get endings. Kind of. Overall their characters are fairly static compared to where they were at the beginning of the drama. One even manages to perfectly wrap around to where he was at the start, simply for the sake of avoiding an overly unhappy ending. The optimistic tone is rather at odds with many of the best parts of "Drinking Alone" which dealt with characters resolving often unavoidable depression by, well, by "Drinking Alone".

While "Drinking Alone" is not, overall, by any means among the worst dramas I've ever seen, looking back it pretty unavoidably failed on an admittedly challenging premise. The drama's characters are aggressively passive, solitary, and even anti-social by nature, so how can there even be a plot, yet alone a romance? In the end, this plot was largely nonexistent and the romance was forced. The occasional solid string of funny jokes was ultimately not, for me, enough to compensate "Drinking Alone" for these narrative failings.