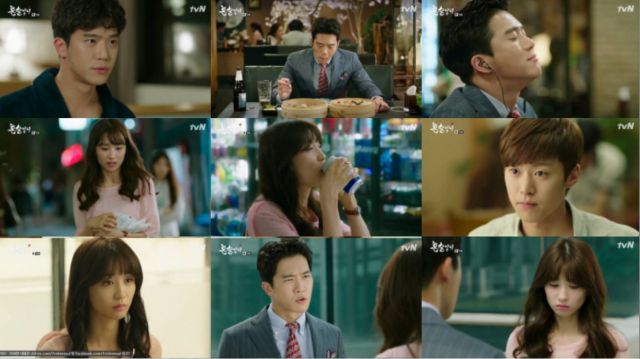 Ha-na (played by Park Ha-sun) is the obvious foil to Jeong-seok. Whereas Jeong-seok is an antisocial jerk who is nonetheless high on the respect chain in the teaching profession, Ha-na is the exact opposite. She lacks much in the way of authority or reputation, and is in point of fact not much older than the students she's supposed to be instructing. If Jeong-seok is a reminder of how our betters can be rude and snooty, Ha-na shows us that simply having a title does not necessarily make a person competent.

Image is everything in "Drinking Alone", so it's rather telling how the alcohol is the defining, uniting character trait between Jeong-seok and Ha-na. It allows Jeong-seok and Ha-na to simply be themselves and not have to worry how other people see them, which again, explains why they prefer "Drinking Alone" to drinking in a group. With group drinking, the image still has to be maintained, difficult as that task may become with greater inebriation.

There's very much a not-so-different quality at play when we compare these two to the students in this drama. Myeong (played by Gong Myung), Gi-beom (played by Key) and Dong-yeong (played by Kim Dong-young) don't have images. They don't have much of anything, really, which is why Dong-yeong is still reeling so bad from his breakup. If Ha-na seems pathetic at times, the simple fact that she has a job at all is a stark reminder that in today's economy, she's still doing all right even if Jeong-seok snipes at her.

It's fascinating how, even though it's obviously intended to be a comedy, "Drinking Alone" becomes increasingly, horribly depressing whenever I try to break it down into component pieces. This might be because the drama's disturbingly easy to relate to. I, too, come from a culture that puts immense pressure on people to get a respectable job, but even getting that far is only half the battle because afterward it's just relentless self-promotion with co-workers who at times feel like competitors.

That's why it's easy to like the various characters in this drama while at the same time understanding why Jeong-seok and Ha-na don't especially want to drink together with them. Aside from Jeong-seok the other teachers do make some effort to be nice. Jin-i continues to be a somewhat better role model than Jeong-seok even if she lacks his flash. Likewise, Myeong and Gi-beom do at least try to comfort Dong-yeong instead of being overly cynical. That much is human and relatable.