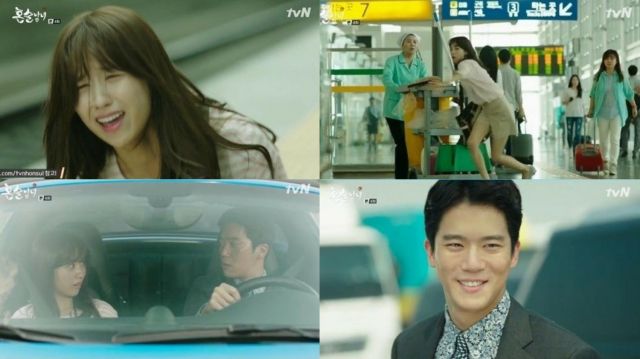 The main problem with Jeong-seok repeating his proper drinking rules all the time is that it becomes easier to see the flaws in his thinking. Jeong-seok's happiness appears to be entirely dependent on other people not showing up and annoying him. So he has to live like a hermit, except that Jeong-seok's job literally just involves talking to people and his hobby necessitates going out to public places. And even at home Myeong is hanging around being an annoying little brother.

But let's ignore Jeong-seok being an island for a moment. Jin-i continues to fascinate me by the way she keeps imprinting on Ha-na. Overall Ha-na is more of a perspective character than she is one with her own personality, and Jin-i's sisterly advice, while well-meaning, frequently feels more like an elaborate overly happy self-justification than it does anything having to do with Ha-na. That Ha-na is even nearby for Jin-i to talk to is largely incidental.

By the end of the episode this raises some fairly interesting life philosophy questions. Is Jeong-seok right, in that Ha-na would be better off not hanging around Jin-i at all, since the woman has clear problems with life? Or does Ha-na hang around Jin-i because she genuinely likes Jin-i, flaws and all? It's hard to tell because when Ha-na retreats to "Drinking Alone", it's a completely different reason every time. For Ha-na, alcohol is an all-purpose elixir.

Not all problems can be solved with liquor, yet it seems as good a retreat as any when no other plan seems to be working. Observe how Dong-yeong still can't get over his breakup. Gi-beom and Myeong are completely exasperated by Dong-yeong's idiotic behavior, yet they can't come up with any other kind of satisfying solution. Whether the problem is Dong-yeong's emotional separation, Jin-i's fear of inadequacy as a woman or Jeong-seok's generic hatred of people, alcohol solves all these problems.

"Drinking Alone" is kind of like a long, largely ineffective beer advertisement. It portrays drinking as this thing people do rather than as a thing people should do. Not coincidentally, teaching and learning are painted with the same broad brush. "Drinking Alone" isn't saying we should just shut down all the schools, but it is questioning just how much we can expect to learn from people whose personal lives are ecentric, at best. Compared to that, Ha-na getting hit on by a younger guy manages to come off as genuinely sweet.