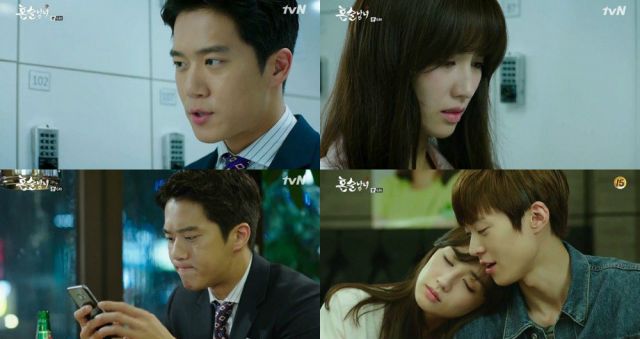 Jeong-seok continues to leave me less-as-impressed as a character. It's not that he's a bad guy, or especially unlikable. The problem is he almost never actually does anything. Jeong-seok is, by his own life's plan, excessively passive, and he's also so successful that Ha-na can't even really approach him. This makes for a terribly unsatisfying romance, especially when more immediately pressing crises come up like Ha-na's inevitable embarrassing collapse on camera.

Which on merits was actually pretty fun. Sure, the experience was mortifying for Ha-na, but why should her co-workers care when it gets turned into a hilarious meme? There's a very odd kind of back-biting attitude to the employment environment profiled in "Drinking Alone". Sometimes they get along well enough, but the minute something bad happens and mutual support is genuinely really important, that's when Ha-na is left to her own devices and has to cope with, you guessed it, alcohol.

The way the students are able to look out for each other while technically being in competition is a marked contrast. Gi-beom is a jerk even on his best days, but it's so very easy to feel sorry for him reminiscing about his grandmother. Likewise, Myeong is a serious step up from Jeong-seok in the potential boyfriend department solely by virtue of the fact that he actually notices when Ha-na is in trouble and makes an active effort to try and help her.

Speaking of curious relationship dynamics, consider Jin-woong (played by Min Jin-woong), a character we don't see that much of on a personal level because all the guy ever seems to do is make silly parody jokes. All the same, it's remarkable how he seems to be the closest thing to an actual friend that Jin-i has, simply because his position is relatively equivalent to hers. It's similarly sad to realize that while Jin-woong seems to have a life, it becomes clear once he comes home that Jin-woong has the same solitary existence as most of the characters in this drama.

This sense of tone often works to make "Drinking Alone" feel very awkward, since the main defining attribute of most of the characters is that they do not undergo character growth. The only ones with any potential to transcend that are the ones young enough that their habits and attitudes are still being molded. Whether there's any real hope for anyone else is unclear, which adds a somewhat depressing taste to the drama's overall presentation.