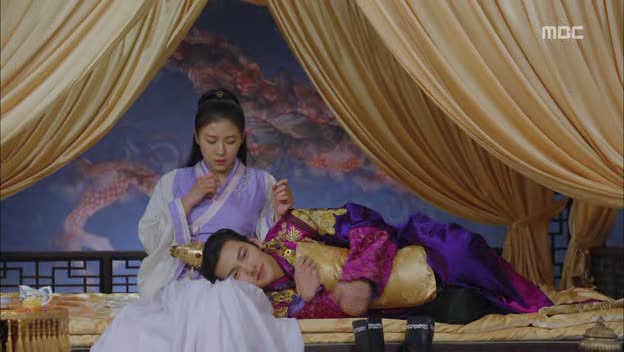 "Empress ki" is finally bringing the main love contenders together with the major political storylines under one very expensive palatial roof. There are childish antics of men in love and cutthroat political dealings all in one hour and both are melded in a way that is singularly appealing.

Because Ji Chang-wook plays Ta-hwan with such finesse, he can make Ta-hwan a very immature emperor who spends his time obsessing over Seung-nyang rather than fighting to put power behind his crown. This immaturity currently fits his character and the show's need for some levity in wartime. It is Ta-hwan's armor against the world and his terrible circumstances. He is swaddled in silk and gold, but he has no more power than a Goryeo slave. It is early enough yet in the drama so he has time to mature and grow, but I would like to see it start now. With Wang Yoo under Yuan's roof, it is the perfect time to have Ta-hwan grow into a man worthy of his position with his opponent as incentive.

Along with Ta-hwan's growing affections for Seung-nyang and his stagnating maturity comes the growth of Tanisiri's feelings for Wang Yoo. He is the opposite of Ta-hwan, her husband, in that he's strong and firm in his beliefs and he is also an intellectual equal for her. Her character is now stimulated by something beyond ambition and her father's ambitions. She is rounding out nicely with this romantic involvement. As her interest grows, I think the romance between Seung-nyang and Wang Yoo should be fleshed out more as well. The earliest did not give them enough of a history to make their love as epic as the show wants. A few moments of solid romantic interaction would do the couple good, but they are instead engulfed by politics worries that detract from the romance. A clever way to do it would be to have him encourage her. His presence already strengthens her; she is full of life and determination now that he is there.

With all players and all roads in the story meeting in the palace, "Empress ki" is feeling a bit bumpy they all come together and merge. Mostly it's because the story is ready to shift again into different territory. Empress Ki never stagnates for long on one major plot point. It moves and keeps the characters moving along with it. El Temur, the largest foe in the drama, is ready to make a large move after the secret provocation of the clever Wang Yoo. The move should be exciting, but what it highlights is the strength of the story and the weakness of Wang Yoo's character. Like Ta-hwan, he hasn't grown much. He is the opposite of Ta-hwan: strong, self-directed and unafraid of deathly challenge. However, he hasn't changed much since episode one. Ta-hwan has, at least, become minutely braver and more aware of the world. Wang Yoo hasn't truly come to a low and let him break him. I want to see these main characters change as much as the plot. Tanisiri is the most interesting main character because she is the only one undergoing true change.

Despite the criticism, "Empress ki" continues to deliver intrigue and capture interest. It is fast-paced without creating confusion and it still has plenty of time to make its character development equal to the plot development, the beautiful OST, the fine camera work and the exquisite sets.