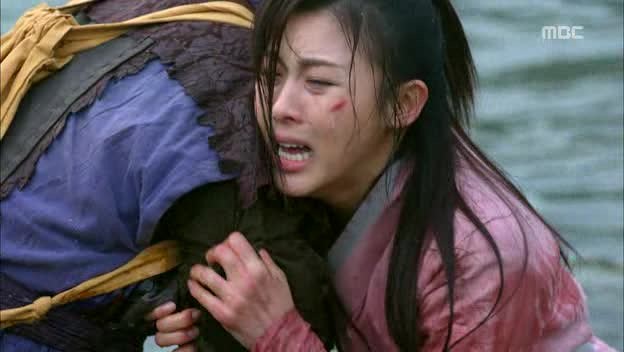 "Empress Qi" is a beautiful show and that is its biggest draw. The people are beautiful. The sets are glorious. The costumes are grandiose. The music is grand. What it is starting to lose, however, is logic.

Time frames don't make sense, such as the length of time Lady Park and Seung-nyang were pregnant. Park was long overdue and Seung-nyang was definitely not even close nine months when she delivered. But the pregnancies were paralleled to forward the plotline and to allow for further plot mechanizations. Those mechanizations involve the political and social circles that currently exist folding inward. The introductions of new characters are few and far between, which makes recycling old characters necessary. That in turns makes conflict stale as old issues are rehashed. It's understandable that a fifty-episode show needs constant instigation to keep the characters motivated and the show interesting, but not at the expense of logic.

Characters are starting to run around in circles, stuck in a micro universe that has long since become too simplistic. Perhaps this episode showed "Empress Qi"'s growing pains as Seung-nyang is given a huge shock and gets ready to dose out revenge and Tanisiri takes a drive over to crazyville. Her mental break was an effective character choice, but only when it isn't pitted by another character also losing his marbles: Ta-hwan. It was too much at once. Just like all of the tears. Every other scene had tears and it was waterworks overload.

This episode was just bogged down by transition material and tears and coincidences. It was difficult to parse out what was important and what was not because of the sheer number of unhappy circumstances occurring all at once. Too many coincidences belie lazy writing and that needs to shape up.

Also, I love that Wang Yoo is back in Goryeo, trying to actively get his nation back on its feet, but his actions are so simple and so rarely shown that it seems like a throwaway plot thread. This aspect of the show needs to be fleshed out more, given real weight so Wang Yoo has a real chance to shine as a three-dimensional character rather than one who has barely come off the paper.

What this episode has shown us is that Ji Chang-wook is the blindingly bright star of this show. He infuses such incredible life into Ta-hwan. Despite the weakness of his character and the rather simplistic turn that character has taken, Chang-wook fills in between the scripted lines to give the viewers a loveable character. I'm just waiting for the rest of the show to follow suit.