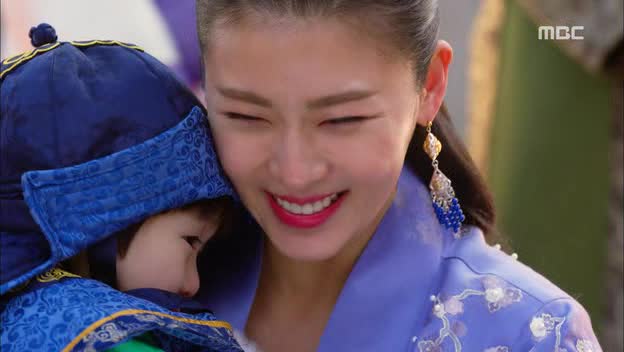 Political tensions have finally peaked and "Empress Qi" is on the brink of war. The good guys have mustered enough strength to combat the tenacious El Temur and his minions. There are still quite a few questions left to answer going into this war that will remain after the battle ensues.

What of Seung-nyang's first born ? This one's resolution is constantly sidestepped and it's getting stale, but it may not be used during the battle between El Temur and Ta-hwan. This issue will bring Wang Yoo back into Seung-nyang's view, which will create a whole new batch of problems. It's just the timing of the whole thing is off and it has been awkwardly dealt with; namely, it's been ignored save for being used during a few key moments for dramatic effect.

A lot of secrets are used this way, which detracts from their effectiveness. Cohesive integration into a storyline is the best way, and to do that, quicker resolutions are needed. Quicker resolutions means that a constant fresh batch of ideas much be thought up to keep the story going, and that's where the problem lies. At times, it feels like "Empress Qi" is floundering for material.

Another such question is that of Wang Yoo's wife. He married her ages ago, she is related to El Temur, and yet there hasn't been a mention of her since the wedding. It is even stranger now that Yon Feisu/Yeon Bi-su ("Yoo In-young") has stuck around as character who is in love with Wang Yoo. Her characterization has changed depending on her role in the story. She was a crafty leader of the Turks when introduced and now she's practically a slave to her love for Wang Yoo in her exhile.

One strong outcome of the buildup to war is the message that leaders need people to lead. Ta-hwan has slowly earned the trust of the governors with the help of Seung-nyang, Tal Tal, and Bayan. He's also learning to trust himself. This situation is paralleled with Wang Yoo who had to create soldiers out of beggars and earn their trust. It is trust that strengthens Ta-hwan as he gains it and weakens El Temur as he loses it.

El Temur's end is long overdue, but has been foreshadowed with all of his nightmares and his decline in mental stability. Historically, he was overturned by Bayan and if the story follows that path, "Empress Qi" should remain fairly strong. If El Temur stays in power much longer, the story will become ridiculously stale. He's like a recycled joke: use it too many times and it's no longer funny.

Press releases have shown that there are new things afoot for "Empress Qi" and I'm looking forward to the new talent additions as well as a shift in the story.