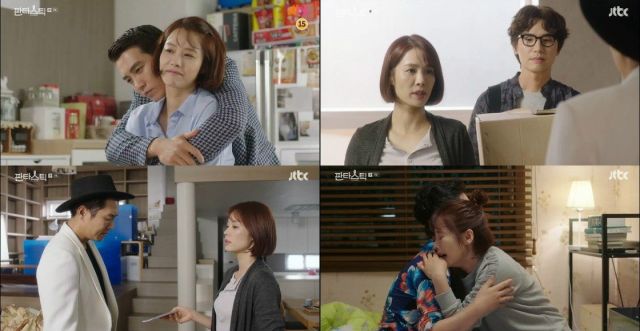 Mi-seon (played by Kim Jae-hwa) is the third best friend of So-hye and Seol- the one who everyone has to call when they're in trouble. Mi-seon never really has any plotlines of her own, she's just a useful shoulder to cry on. Consequently, her character offers some much needed perspective when it comes to difficult questions like, am I happy, and should I do such-and-such risky behavior considering the possible trade-offs?

The generally encouraging answers Mi-seon gives are of enormous help, since both So-hye and Seol are locked into a cycle of reflexively conservative behavior. Even knowing that she's probably dying So-hye has trouble getting up the gumption to leave her comfort zone. Hae-seong is also really important when it comes to encouraging So-hye to just try something different without worrying too much about the possible consequences.

"Fantastic" is, principally, a drama about confronting fear. While So-hye's fear of death is the most obvious such example, her smaller fears about life are constantly on display as well. So-hye is scared of public attachment. She's also scared about the prospect of serious trust and intimacy. This all ties in mostly to her personality- and also some of the unsavory people she's had to deal with in life. So-hye's old enough to be set in her ways, and this also allows for a more general fear of change.

Even though Seol superficially appears to have a more outgoing personality she has many of the same personal issues. The woman is quite clearly fully repulsed by her family yet just can't bring herself to do anything radical about those problems. And for the duration of this episode, Mi-seon is able to be the receiving ear to all of these fears as the story inches ever slowly toward answering the all-important questions about how much these fears are rooted in reality.

It's fortunate that Hae-seong continues to be a stand-up man who shows himself to be worthy of trust and not generally all that vulnerable to manipulation. It's somewhat less fortunate that Joon-gi is shown this episode as having his own insecurities and flaws, although I see better now that perfect men, aside from obviously being nonexistent in the real world, don't really make for the best fantasy material either. For the leading ladies in "Fantastic" a mere boy toy isn't really all that helpful. A real man who can stick around through thick and thin- that's a man worth holding on to.