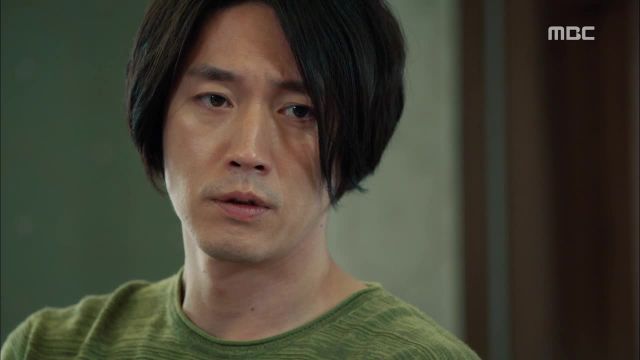 Circumstances take a turn for the worst for the blissfully happy married couple. Although they are Happy Together, it is the world that refuses to leave them to their own devices. If it did, this wouldn't be quite as dramatic a drama.

What is beautiful about this main coupling is the genuine affection between them. The show is giving them (and us) plenty of time to get to know each other and fall for each other. Not only do they begin to love each other, but that love permeates outwards into those around them. Mi-young gets through to Geon's half brother Lee Yong, turning him into a human rather than a revenge-filled puppet of his mother's. He starts to help Mi-young out and the interaction is a refreshing change for him. Finally Choi Wooshik had a chance to do some real acting that required more than groveling and pouting. One thing that makes Choi such a fine actor is that when he is not the focus on screen, he is still in character.

Another strong point of the drama is that both Geon and Mi-young have strong familial support. Geon's grandmother and Mi-young's mother treasure their children and their in-laws. It's rare to find family members, especially matriarchal family members, who treat their children so kindly. It is those relationships that sustain the main couple when Yong's mother and the greedy family try to wrench the couple apart. The divorce agreement that Geon drafted at the start of their marriage is made public and gives everyone else an opening to attempt to insert themselves between Geon and Mi-young. The press and Geon's family hound them, Se-ra and Daniel take their chances at winning the people they love. But Geon's grandmother and Mi-young's mother are there to support their progeny.

As for the humor, it stays as relevant as it is funny - which is to say it is very funny. The couple has not yet slept together again and Geon's ability to resist his hormones is wearing thin. He literally refers to his libido as his inner beast and makes a few references to it throughout the episode that are laugh-out-loud funny. He consults two doctors about how to handle it, which serves to gives us a few more laughs and to highlight the fact that Geon has a genetic illness - knowledge of an illness in dramaland always means the illness will strike. And it does, sending "Fated to Love You" into it's second half in the darkest of manners.

"Fated to Love You" is definitely headed into more sombre territory. I'm hoping it can retain it's sincerity as it marches into the second half of its run.

"[HanCinema's Drama Review] "Fated to Love You" Episode 10"
by HanCinema is licensed under a Creative Commons Attribution-Share Alike 3.0 Unported License.