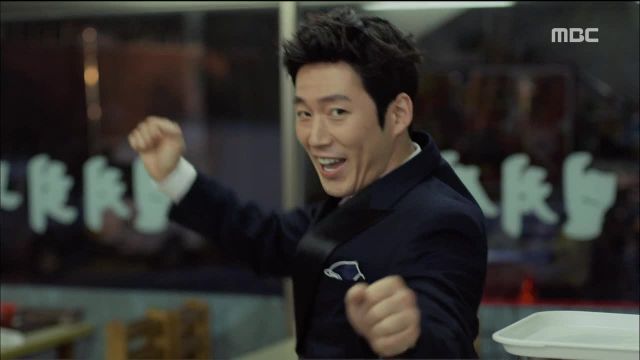 "Fated to Love You" has come full circle since its beginning and is now continuing forward. The main couple has been molded by their experiences and they have come out stronger and a little wiser. Not only is there character development this episode, but the humor was brought back detracting from the gravity of the tragedies Mi-young and Geon have experienced.

In the three years that have passed, Mi-young has become a famous artist, but still keeps her humble, kindly demeanor. She has come back a more confident woman who carries with her the sadness of losing her baby, Gae-ddong. It has colored her artwork and she took the experience and created an exhibition to inspire downtrodden women. This is a wonderful message to send and it's good to see a female lead deal with tragedy so healthily. It honors the pain of women who have lost children.

For Geon, the three years have not quite promoted the healing that Mi-young has experienced. He kept the baby's crib and toys in his room and cannot forget him or Mi-young. He doesn't seem to have adjusted to the loss quite as well, but he has come to terms with his mortality, which is what caused his noble idiocy in episode 12. What is so poignant about Geon's inability to let go is that he really did want to build a family with Mi-young and that opportunity was lost. He even retains a very mother/son like relationship with Mi-young's mother that is beyond adorable. Now that Mi-young is back in South Korea, he cannot help himself but chasing after her. And that is where the humor comes to play.

The humor relied on metaphors that referred to happenings within "Fated to Love You" and that related to South Korean pop culture and dramas. This gave the show a distinct quality that separates it from the Taiwanese drama while still relying on the original drama's solid story structure. The power is in the details.

The show also relied on Jang Hyuk's athleticism to provide some physical humor. His character stalks Mi-young in a very conspicuous way that emulates a horrible spy movie, but is incredibly funny in context. Compounded with the extreme jealousy that Geon feels when he sees Daniel and Mi-young together, the show has regained the humor that was swallowed by the sorrow of episode 12.

Daniel and Se-ra have not had as much growth as Mi-young and Geon. In fact, they are relatively stagnant characters. Hopefully they will be developed from here on out because that would make them more interesting. I do like seeing Daniel interact with Mi-young's mother, if only because it provides such a distinct contrast with Geon's interactions. Daniel and Mi-young's mother are very formal with each other while she and Geon give each other a hard time in her dialect and in more informal language. It hints at what could've been if Geon and Mi-young had stayed together, and what could be in the future with how much they've changed.

I'm glad the tragedy struck quickly and was used for development rather than to garner melodramatic tears - it gave us this gem of an episode. Watching Mi-young and Geon come together again in different parts of their life will be satisfying because of it.

"[HanCinema's Drama Review] "Fated to Love You" Episode 13"
by HanCinema is licensed under a Creative Commons Attribution-Share Alike 3.0 Unported License.