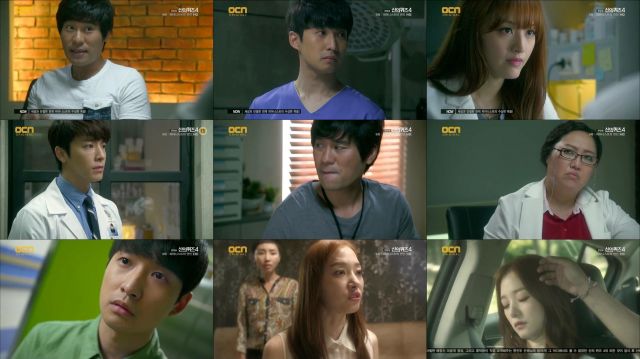 Well that was a pretty stupid resolution to the cliffhanger. Granted, we knew that Kyeong-hee wasn't actually going to die or anything, but it was all a dream? Really? I guess that makes me feel a little better about Jin-woo dropping what I assume was a decent cup of coffee. I bet it was good coffee too. Fortunately, for the rest of the episode we focus mainly on the current mystery, and the overarching storyline is largely confined to its own mysterious bits.

Here's the information we're shown at the beginning- this woman dies, of no apparent obvious cause, at home while playing the piano. A man appears to have been taking pictures of her this whole time- and yet it's another woman who discovers and reports the death. Who is this man, why was he taking the pictures and, of course, how did the woman die are the main essential questions the drama sets out to answer here.

A pity that the title of the episode mostly spoils that, but at its best, "God's Quiz Season 4" has recognized that it's not necessarily the surprise of the ending that makes the proceedings interesting. Rather, it's the emotional catharsis of understanding the complex motivations that led to the crime being committed in the first place. And even when the main thematic takeaway here is something as corny as love, the calming element in lives filled with conflict, the sentiment is a sweet one.

There's also a surprisingly good tie-in with the exact scientific method of murder, something this drama usually doesn't do because most of the time it would sound goofy. Well, maybe not if the writer came up with the method first and then worked backwards to find a story to put it into. That's the main reason why the narrative functions so well here. Yes it's still a detective story but primarily it's just a story. Perhaps not a terribly complicated one, yet a story nonetheless.

Mind, the investigation parts are fairly decent. There's good explanation of the odd facts of the scene of the crime which we see at the beginning, which lead to greater complexities than appears at first glance. All in all this makes for a fairly solid episode of "God's Quiz Season 4". Even the romantic subplot comes off as fairly charming, however chronically underdeveloped, because it just ties in that well with the investigative and thematic elements.