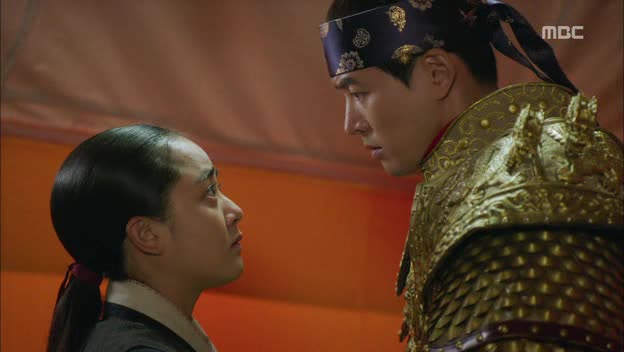 And it's over. "Goddess Of Fire Jeongi" has run its course, killed a few characters and managed to throw in a few parting moral shots before it ended. Jung chose to go to Japan to save the lives of the people in Punwon Kiln. That means she also left behind Gwanghae, as we knew she would. He is appointed crown prince and de facto ruler of Joseon as his cowardly father flees to the north.

The strongest points of this drama were the acting, the music and the period-feel. The costumes and sets were lovely. Moon Geun-young was strong as she always is in her acting. What failed her was the script and her character's development, which was stilted and choppy as though the writer couldn't decide what kind of heroine he wanted to portray. She was inconsistent not because of the duress in her life, but because of severe writing flaws. In this last episode, she decided to forgive Kang-chun for forsaking her until the end. This is contrary to everything she's done for about one-third of the show.

If I were to re-write this ending, I would've had Jung taken when Tae-do was killed. The production team wanted to have her perform a heroic act, however, and had her return so that she could choose to leave Joseon for the good of her people. Having her kidnapped outright would've been more realistic and so would allowing Shin-seong to live. He died in a sobbing Royal Consort In-bin's arms, which was purely for dramatic effect. Shin-seong didn't die until a little later. I hate using death merely for getting a rise out of an audience. It was a waste of his character's illness and his sweet relationship with Gwanghae.

Another ill-handled aspect of this finale was the fact that it tried to tie up all loose ends save for the basic premise of the plot: Jung goes to Japan and we never hear from her again. But all other characters get a bow-tied ending rather than the writer letting the characters run their natural course. Kang-chun was killed saving Yook-do and gets the chance to explain to Jung why he never accepted her. Yook-do gets the chance to talk to Jung before she leaves. Jung's teacher gives her his blessing for a good life making ceramics in Japan. These are all events that are highly improbable and therefore seemed very phony. Even Gwanghae gets to the dock just as Jung departs so he can watch her leave. It is too much.

The only character tie-up that seemed natural was Hwa-ryung's mental break. The men in her company turn on her and her business dealings are ruined when Inbin escapes with the cowardly king. Hwa-ryung has been making excuses to herself and other people about her greed and jealousy and the treachery has indeed weighed heavily upon her. Tae-do's death triggers a quick downward spiral to insanity that leaves her roaming the streets searching for Inbin. Her love for Tae-do and her need to "beat" Jung bordered on the obsessive and this seems a fitting end for her.

"Goddess Of Fire Jeongi" indulged in some name dropping that served no purpose. During a scene where Gwanghae is having a war meeting, Lee Soon-shin is mentioned. Yes, Lee Soon-shin was an amazing and brilliant admiral, but if his name was to be dropped, the show should've gone somewhere with it. It was too rushed for the name to have any real impact. In general, the show should've focused more on the struggles with Japan because that is the major conflict that took Jung, and many other artists, away. Lee Soon-shin, the Japanese leaders like Gato and Hideyoshi should've been mentioned much earlier. As it is, we only met Hideyoshi a few episodes ago and his portrayal was a complete characterization of the brilliant enemy of Joseon.

Some plot threads were completely dropped: Imhae's futile but potentially emotionally significant rivalry with Gwanghae; Jung's pain over Tae-do's death. Then, the idea of importance of porcelain being a highly-valuable aesthetic commodity morphed into the idea that Jung and other artists could survive the war and the Japanese invasion by losing themselves in the art of creation. It's a good way to look at art, but the idea was introduced so suddenly that it didn't fit with the rest of the story. 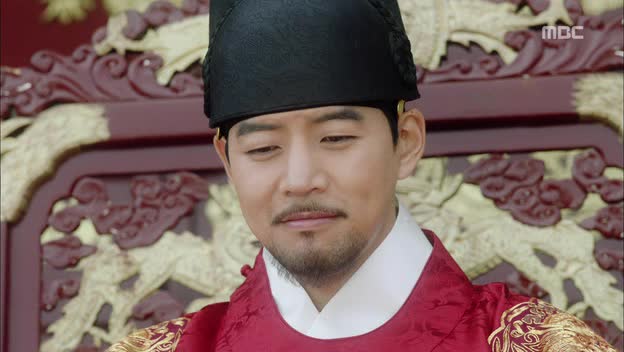 Rather than have the last scene be of Jung leaving, the last image on screen is of Gwanghae on his throne, seventeen years later, wondering how Jung is doing. It lessened the impact of her departure and the reason for it. It seemed like the writer was trying to re-emphasize the tepid romance between Jung and Gwanghae, but it didn't work. The declaration of love Jung made for Gwanghae earlier in the episode seemed awkward and ill-placed as well. She barely acted like she loved him. Her actions were never truly motivated by love for him so to have a declaration is the only way to really tell the viewers that yes, Jung loved Gwanghae. She never went out of her way to help him as he did for her.

I suppose that's the big issue with "Goddess Of Fire Jeongi": the depiction of emotion. The story never came to life. It just stayed in the script book and never became a drama entity of it's own. If I had been able to connect with the characters and the story, plot inconsistencies wouldn't have mattered as much. Yet, until the very last second, I didn't feel Gwanghae's pain at losing Jung or Jung's fear as she made the decision to leave for Japan despite fantastic acting. The weak writing let this show down. It had the right trappings, but it didn't use them well.