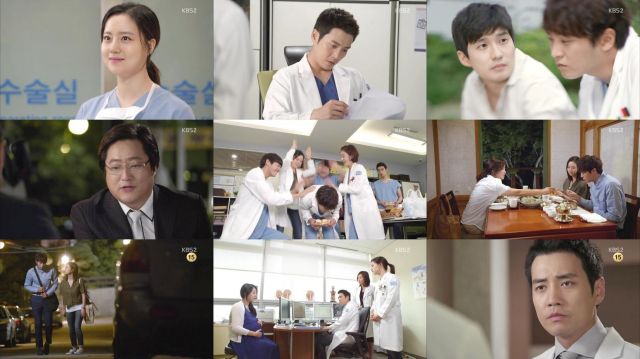 The drama seems to have forgotten most of what it's been doing the last several episodes, which is fine by me, since those episodes were just painful to watch. Shi-on is now back to being a man of fairly limited abilities. And yes, he is still solving problems with words- but not emotional ones. Just simple logical statements about the environment which he can observe and comment on.

These moments work a lot better than his amateur psychologist bit. In the first place, it ties into his original characterization as being a poor communicator. But more importantly, this is Shi-on demonstrating his value to the hospital by doing stuff that no one else can do. Or more specifically, won't do. It's just a matter of social standards- and it's much more refreshing to watch Shi-on struggle against standard social conventions than moustache-twirling evil doctors.

The lack of explicit reference to prior episodes helps a lot here, as it lets me think that the reason why Shi-on is in trouble with administration is for more sensible, well-justified reasons than the arbitrary conflict that has actually been built up. When Jeon-woo makes the argument that they needed Shi-on in the room to make a critical analysis in the surgery, this carries genuine weight. It forces the question of whether the hospital is valuing doctors for their competence or their willingness to be polite.

We finally get another look at Do-han and Chae-kyeong's relationship, and this time they actually have a fight. Not over anything sensible, like the state of their relationship and commitment to each other, but about work stuff. They have this weird passive-aggressive thing going on- as in, they'll be passive about one issue but aggressive on another for completely arbitrary reasons. Shi-on would never be able to figure out what the deal with their relationship is because it's built on this weird foundation of emotions being dictated by logic.

It's amusing stuff. Really, there's lot of good, amusing moments in this episode. The writing does a much better job tackling the autistic issue than any of the ham-handed patient-of-the-week scenarios have, because there is a fair amount of humor trying to figure out how to socialize and integrate Shi-on into an environment that he doesn't really understand that well. Unfortunately I don't have much faith in this drama's ability to go forward- if it was willing to ignore continuity to make a good episode, it can certainly do so again to make another bad one.