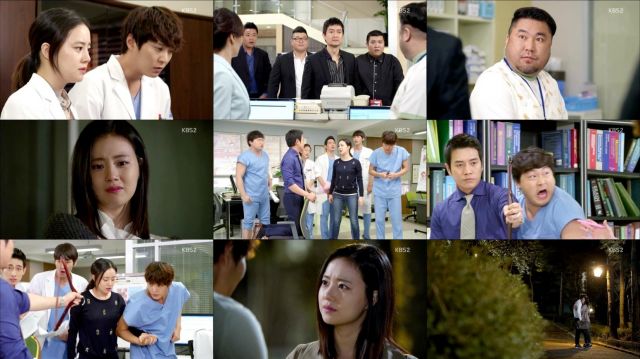 It occurs to me that even though "Good Doctor" is quite explicitly a medical drama, and most of its cliffhangers end on medical emergencies of some sort, the doctors in this show spend relatively little time actually doing medical stuff. Important surgeries are usually done within a few minutes, and there's rarely ever any kind of fallout or long-term implications. Do-han's stab wound was glossed over when it first happened- and even now that it's become a plot point again the problem is resolved almost as quickly.

I actually do like the medical stuff, provided the drama deals with it an interesting, emotional way that doesn't resort to gimmicks. So I was rather disappointed to find that this episode once again finishes the surgery quickly so that we can spend more time on other plot points. Like, say, the corporate battle over the hospital's future that mostly involves talking about financial stuff in a ridiculously large conference room. Yeah, it's pretty dull.

The romantic plot between Shi-on and Yoon-seo fares better. While not as strong as the general antics last episode, there's a certain warmth and heart to the performances involved that makes for a fun kind of fluff. This drama hasn't been very good about making parallel metaphors, but the tone is at least getting better, and the surrounding subplots now do a better job accentuating Shi-on and Yoon-seo's relationship at least in terms of good feelings.

One character, for example, gets an entire backstory out of a scene that at the time I thought was just a one-off joke. Another has managed to turn a series of running gags into actual character development. "Good Doctor" owes a lot of the success in these moments to its charming performances. Without context a lot of this stuff is just goofy- but I'm fine with harmless, likable goofiness even if it brings up a lot of plot questions.

For example- the doctors are practicing Peter Pan? Really? Don't they have actual work to do? This is the kind of stupid plotting that frustrated me earlier, but since the main purpose of the scene is to provide more fodder for the cute Shi-on/Yoon-seo subplot, I'm all right with that. "Good Doctor" may have fumbled its chance to be a truly great show, but I'll settle for cuteness if that's what's being offered. At the very least it works well in the context of the drama's serious subplots being not so serious, but still dramatic enough to warrant sufficient emotional attention.