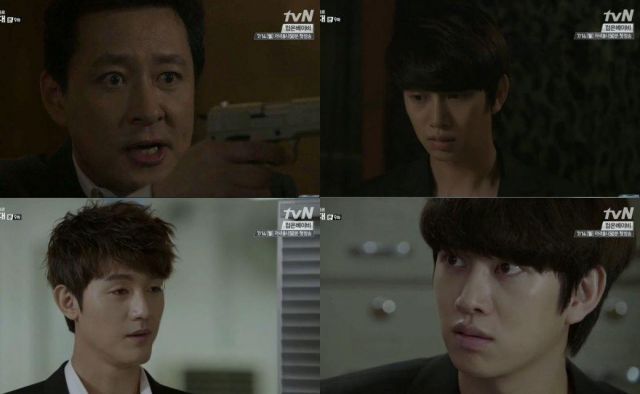 For the large part of this episode, it's unresolved as to whether Won-bin has actually turned traitor to the team or whether his actions at the previous cliffhanger were part of some more convoluted scheme. For most of the filler period until we finally get to the point that Won-bin's loyalties are cleared up once and for all, we're treated to jokes about Won-bin enjoying his young person body, mingled with hate and resentment toward all those people who treated him as a weird old guy before.

These bits are actually pretty funny. Won-bin clearly thinks that he's entitled to good treatment, and seems less upset by the fact that people were once rude to an old guy as he is that they were rude to him personally. Young Won-bin is confident and goofy. Once again the youthful members of the cast excel in providing an excellent counterpoint to their older selves, demonstrating that they really are the same men in altered bodies and that yes, they really do act this childish all the time.

The problem comes in trying to relate any of these comedic bits to the broader plot, which just comes off as awkward and strange. Either everyone on the team is an idiot or...well there is no or actually. There's very little reason to have confidence in their abilities. Indeed, they seem rather nonplussed by Joon-hyeok's absence to a point that's rather disconcerting. Trying to factor all of this into the comedic bits is an exercise in futility.

The larger narrative thrust where the team finally confronts the true villain doesn't come off as convincing at all. This is mainly because slapstick continues to be intermingled throughout even though the characters continue to brandish guns and there's a very serious threat that people might end up dead. I don't know how we're supposed to reconcile this with a silly sequence where Jeong-woo fiddles around with his phone.

Worst of all, though, is the implication that there's layers to this conspiracy, which implies more awkward antics along the same things for the remaining episodes. I have no idea what the scriptwriter is going for here. Moon Seong-hee has already used up most of the more elaborate dramatic stakes and it's unclear what direction the conspiracy could go from here that won't just feel really contrived. The script really needs to focus more on jokes. She's a lot better at those.