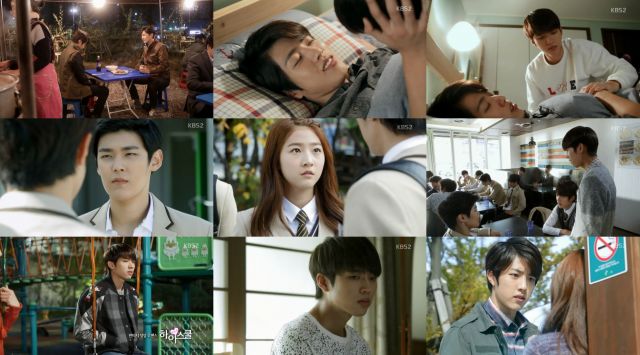 Cliffhanger of the last episode notwithstanding, we do not, in fact, open up with a confrontation here. Apparently Seul-bi's presence alone is enough impetus to get Woo-hyeon to compromise with his mother. It's not exactly the kind of progress that Ji-hye was hoping for, but anything that gets Woo-hyeon to willingly spend time in her presence is a win for the older woman. Their relationship here thaws somewhat- not a whole lot, but "High School - Love On" has never been particularly interested in doing anything in a hurry.

Seong-yeol is still sulking though. Seul-bi's presence in the house puts a damper on his behavior too. He appears to be limited in the number of people he'll act out in front of. If it's just his parents, Seong-yeol can be a brat. If it's just his school peers, Seong-yeol can be a brat. But all of them in the same place at once appears to be enough to stifle him. Which isn't necessarily a good thing, as he gets increasingly obsessed with the strange mark on Seul-bi's wrist.

I'm not really sure what to feel about the whole angel plot at this point. It certainly seems like there's enough drama to go around that more commentary on Seul-bi's divine nature feels a bit off. This episode calms a lot of the conflict down while still moving the storyline at a decent pace, but then we get to the cliffhanger and then the preview, and it's pretty inescapable that there's going to be a lot more fighting.

The subplots are in an awkward spot as well. "High School - Love On" takes a note from "Cart" of all places, denoting a certain kind of employment discrimination against teens. That bit made me feel a little awkward, because I'm not entirely sure who the characters involved even are. Most of the non-lead students are just backgound noise, so it's a little odd to see them given their own plots here.

This is especially true in light of the characters we haven't been following lately. Apparently Joo-ah does not, in fact, have any friends. This revelation comes off a little clumsily, given that what little she's done in the last few episodes would seem to indicate Joo-ah has been doing fine, but this is a problem mostly wrought by the drama's odd shift in focus lately concerning non-central characters. There's nothing that makes the drama unwatchable or anything- I just wish it would come to better a little more succintly.