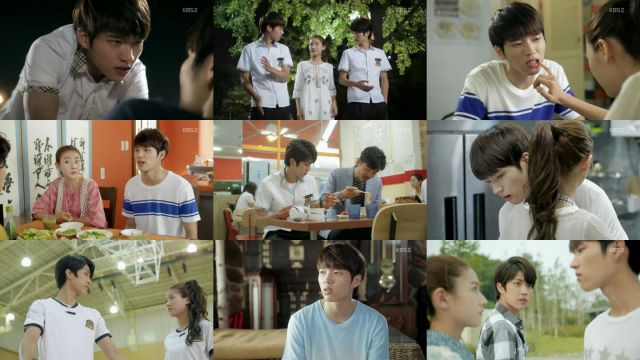 This episode marks an abrupt shift from bullying to romance. Like, so fast I wasn't even sure what was happening at first. Not only is the romance in full perspective it also moves really, really fast, with plot points being fully resolved and put into complete focus by the time we get to the cliffhanger. I had to double check to make sure that this is, in fact, a twenty episode drama. The production team has already decided they're tired of the sexual tension? Huh?

Granted, it's a weird thing to complain about from my perspective, given that for most of this episode "High School - Love On" is just so frustratingly safe. The conflict which marked the crisis at the end of last week's episode is resolved with fairly little fanfare. Of course, these are high school students, so it's not like anyone was actually going to die. At the same time there's no apparent short or long term consequences so...stuff just happened I guess?

Even the humor's starting to wear a little thin. Seul-bi sees everything in terms of dramas. Yeah, we get it. Overexposing this particular joke in weak circumstances just makes it seem like the writer has run out of funny ideas. Ironically, this did get a big laugh out of me at one point, mostly because I was thinking the exact same thing Seul-gi was and didn't realize until she said it that, oh, right, just because this is a common romantic comedy trope doesn't mean it applies to literally every single person that does it.

Other storylines beyond these trends move at an unimpressive pace. I'm really not terribly thrilled with the whole storyline about Woo-hyeon's mother, mainly because the whole thing just feels so awfully contrived. Seul-bi's being self-referential about what things are like in dramaland really doesn't work when "High School - Love On" itself feels less like an exploration of real people and more about hidden, irrelevant, pointless secrets.

At this point the main positive the drama still has going for it is that the characters do still convincingly feel like high school students. They come up with half-baked plans and change allegiances on a whim because, well, they're teenagers. Similarly, while it's easy to criticize the speed at which the story is moving, you ever actually remember high school relationships? They'd start up and end in the course of a single week a lot of the time. On the other end, such events are not inherently exciting, so hopefully "High School - Love On" can come up with some more interesting tricks next episode.