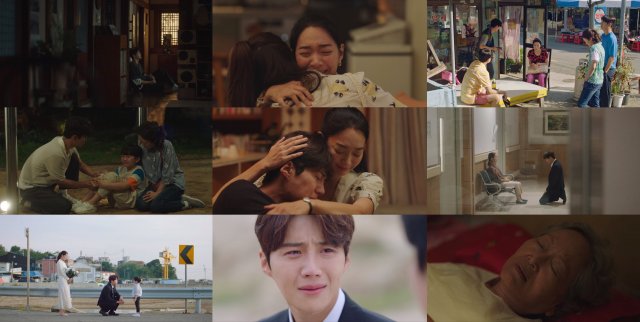 I had expected the ultimate explanation of why Chief Hong left Seoul to be maudlin and contrived. It seems unlikely, after all, that Chief Hong had actually killed the security guard as implied or he would be in jail. But I was pleasantly surprised by the story we ended up getting. It is, of all things, a more effective critique of capitalism than anything "Squid Game" did that ties in quite well to Chief Hong's backstory, explaining why he is who he is.

In short, Chief Hong used to be a hedge fund manager. He used to value money and success, despite his personality not really being suited to the work. Chief Hong rationalized the apparently useless nature of his job by telling himself that through hedge fund management, he could give poor people a hope of one day being rich themselves. The security guard was one such man, wanting wealth not for himself but to give his family a better life.

What crushed Chief Hong's spirit and sent him back to Gongjin wasn't just the death of two people he considered friends. It was the realization that in his pursuit of status, he had caused those deaths. However indirect Chief Hong's own contributions to those deaths may have been, he was still acting in his capacity as a servant for capital. As Jesus Christ himself said, no man can serve two masters. And so Chief Hong renounced his wealth, and dedicated his life to helping people directly.

It's not a perfect metaphor, mind you, given how aggressive "Hometown Cha-Cha-Cha" has been with its product placement. Although I am starting to wonder the exact source of Hye-jin's wardrobe, which feels bizarrely old-fashioned even compared to the old ladies. Still, the sentiment is in the right place, and perfectly encapsulates the appeal of Gongjin as a community not just for its characters but for the viewer. It's a town where people actually care about each other, and express that via their actions rather than through monetary exchange.

This is also mostly well-communicated through the subplots. Yeong-gook and Hwa-jeong reconcile, accepting their mutual sentiment as sincere. The resolution of Cho-hee's storyline also demonstrates that even small towns aren't perfect, both in terms of regressive ideals and also the simple reality of how you can love someone that can't love you back the same way. Acknowledging and accepting that uncomfortable truth is bittersweet yet therapeutic.